The Complete Cook's Country TV Show Cookbook Season 11: Every Recipe and Every Review from All Eleven Seasons 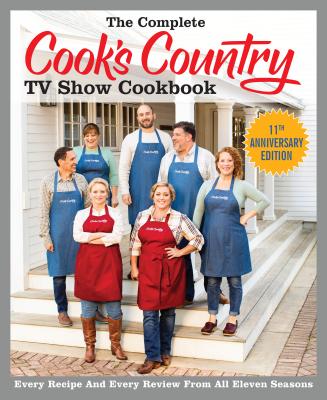 The Complete Cook's Country TV Show Cookbook Season 11: Every Recipe and Every Review from All Eleven Seasons

Every recipe from the hit TV show brought to life in one colorful volume.

Cook along with the TV show! Celebrate over a decade of recipes, road trips, and equipment and ingredient reviews, including all-new recipes from Season 11. This is not your average best-of-American-home-cooking book. With an emphasis on regional and heirloom fare, this eclectic collection offers foolproof methods for making more than 400 recipes from all over America--from small towns to big cities, coast to coast, and everywhere in between. You'll get American classics like Glazed Meatloaf, Roast Beef, Whipped Potatoes, and Mile-High Lemon Meringue Pie, plus little-known local gems like Baltimore Pit Beef, Tennessee Pulled Turkey Sandwiches, New Jersey Crumb Buns, and Oregon Blackberry Pie.

In addition to all the great recipes, home cooks get a glimpse into the origins and inspiration behind many of the dishes. A comprehensive shopping guide lists not only the ingredients and equipment winners featured on the TV show but also dozens of other products given the coveted America's Test Kitchen seal of approval.