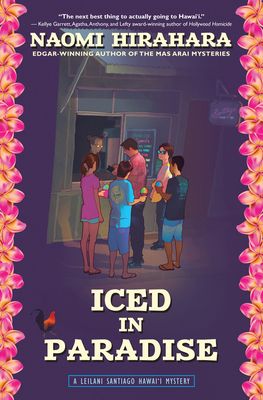 By  Naomi Hirahara
Hardcover
$ 25.95
Out of Stock In Store

Leilani Santiago is back in her birthplace, the Hawaiian island of Kaua'i, to help keep afloat the family business, a shave ice shack. When she goes to work one morning, she stumbles across a dead body, a young pro surfer who was being coached by her estranged father. As her father soon becomes the No. 1 murder suspect, Leilani must find the real killer and somehow safeguard her ill mother, little sisters, and grandmother while also preserving a long-distance relationship with her boyfriend in Seattle.

Naomi Hirahara: Naomi Hirahara is the Edgar-winning author of the Mas Arai mystery series, including Gasa Gasa Girl, Summer of the Big Bachi, Snakeskin Shamesin, and Blood Hina. She is also the author of the new series of L.A.-based Ellie Rush mysteries, published by Penguin. Her Mas Arai books have earned such honors as the Chicago Tribune's Ten Best Mysteries and Thrillers and Publishers Weekly Best Book of the Year. The Stanford University alumna was born and raised in Altadena, CA; she now resides in the adjacent town of Pasadena.