Story of the World, Vol. 4 Revised Edition: History for the Classical Child: The Modern Age 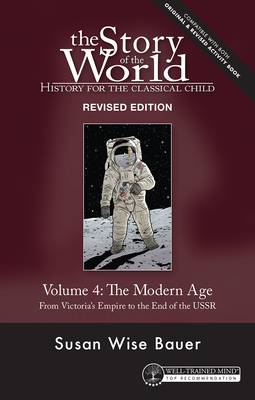 Story of the World, Vol. 4 Revised Edition: History for the Classical Child: The Modern Age

By  Susan Wise Bauer , Illustrated By  Jeff West , Cover design or artwork by  Mike Fretto
Hardcover
$ 26.95
Out of Stock In Store

Spend an entire year investigating the fascinating story of the modern world, from the American Civil War through the end of the twentieth century--from Europe and the Middle East through India, China, the Arabian Peninsula, Australia, and both North and South America!

Designed for parents and elementary/middle grade students (grades 4-8) to share together, The Story of the World, Volume 4 Revised Edition: The Modern Age is widely used in charter and private schools, as well as co-ops around the world. It builds historical literacy, improves reading and comprehension skills in both fiction and nonfiction, and increases vocabulary--all in an enjoyable and entertaining story-like format.
The Story of the World, Volume 4 Revised Edition central text (available in paperback, hardcover, and eBook) offers 42 narrative chapters, told in chronological order and spanning the entire globe, that begin with revolt against the British in Victorian-ruled India, and end with the Persian Gulf War. Independent readers can easily enjoy the stories on their own, or parents and teachers can read aloud to younger students. This newly revised edition includes 48 beautiful new illustrations, easier-to-read formatting, and a pronunciation guide to the names and places discussed in the book.

Jeff West is an established illustrator and his variety and bulk of work is expansive, ranging from traditional art to art for TV and movies. He recently earned himself an Emmy nomination and has worked on blockbuster shows and films. He resides in Arizona.