Some Kids Left Behind: A Survivor's Fight for Health Care in the Wake of 9/11 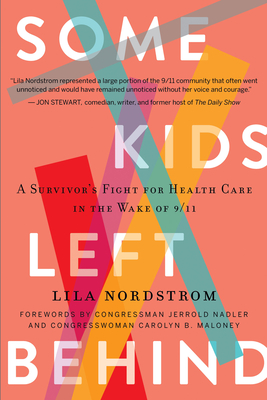 Some Kids Left Behind: A Survivor's Fight for Health Care in the Wake of 9/11

By  Lila Nordstrom , Foreword by  Jerrold Nadler , Carolyn B. Maloney
$ 24.99
Out of Stock In Store (Available to Order)

For the 20th anniversary of 9/11 comes an awe-inspiring account of the schoolchildren poisoned by the toxic air left in the wake of the Twin Towers' destruction and the survivor who fought for health care for them in front of Congress and against the odds.

On September 11, 2001, high school senior Lila Nordstrom watched from her classroom's window as the Twin Towers, mere blocks away, fell. Weeks later, at the urging of local officials and assurance from the EPA, Lila and her three thousand classmates were returned to their school--even though the air was thick with toxic debris, dust, and smoke.

In this remarkable, empowering memoir, Lila shares how the illnesses and deaths of her classmates related to the effects of the 9/11 cleanup spurred her into action. She created StuyHealth and became involved in the fight for the Victim Compensation Fund, working alongside first responders and heavyweights like Jon Stewart, Hillary Clinton, and Nancy Pelosi, proving at every turn that her survivor community also deserves recognition and mental and physical health care and that her voice too deserves to be heard.

This timely tale reveals how tragedy lays bare the American health care system and how corruption and misinformation continue to fail victims of tragedies. An honest, at times humorous guide to advocating for one's self and one's community and navigating the cutthroat world of legislation and health care, Lila's story begs us to consider how we as a nation treat our vulnerable communities and how all victims of all disasters deserve care, truth, and respect. Also included is a section on the meaning of advocacy work, what it means to be an active citizen, and how to support a cause you believe in.

Lila Nordstrom is a writer, producer, activist, and the founder of StuyHealth, an advocacy group representing former students who were in lower Manhattan during 9/11 and the resulting cleanup. She has worked with the National Institute for Occupational Safety and Health, the New York City Health and Hospitals Corporation, and the New York City Department of Health and Mental Hygiene to raise awareness for the health programs in place to support 9/11 survivors; was appointed to the World Trade Center (WTC) Health Program's Scientific/Technical Advisory Committee, where she served three terms between 2013 and 2019; served on the WTC Survivors Steering Committee; and has organized lobbying trips to Washington, DC, to share the student 9/11 story with members of Congress. In June 2019, Lila testified before the House Judiciary Committee on behalf of the estimated three hundred thousand NYC community members eligible for the September 11th Victim Compensation Fund, and in December 2019 she was awarded New York City's Bronze Medallion, New York City's highest civic honor, given by the mayor. Under Lila's direction, StuyHealth has received a wealth of media from local, national, and international outlets, including the New York Times, Economist, CBS, Fox, and NBC. A graduate of Stuyvesant High School and Vassar College, Lila's writing has appeared in The Guardian, Huffington Post, Bustle, Pasadena Weekly, Yahoo News, the New York Daily News, and other outlets. In 2011, she won a Content of the Year Award from Yahoo! for a 9/11 tenth anniversary essay she wrote for the site. In 2020, she was named a Fellow by the Equality California Institute Leadership Academy. Lila is also the cofounder of VoteCaptain.org, a nonpartisan voter education site, and the producer and host of Brain Trust Live, a weekly independent political podcast started in 2012. She has worked in film and television production and development for fifteen years. Originally from New York City, Lila now lives in Los Angeles, California.Congressman Jerrold Nadler represents New York's 10th Congressional District, and has served in Congress for twenty-nine years. He is the current chair of the House Judiciary Committee, and served for thirteen years as chair or ranking member of its subcommittee on the Constitution, Civil Rights, and Civil Liberties. He also served as the ranking member of the subcommittee on Courts, Intellectual Property, and the Internet, and was the vice chair and founding member of the House's Lesbian, Gay, Bisexual and Transgender Equality Caucus, and coauthor of the James Zadroga 9/11 Health and Compensation Act of 2010, later leading the fight for its reauthorization. Congressman Nadler resides in New York City.Congresswoman Carolyn B. Maloney represents New York's 12th Congressional District, and has served in Congress for twenty-eight years. The first woman to represent her district, Congresswoman Maloney was also the first woman to chair the Joint Economic Committee. She currently serves as chair of the Committee on Oversight and Reform and senior member of the House Financial Services Committee and the Joint Economic Committee. Maloney cofounded the House 9/11 Commission Caucus where she pushed for the legislation that created the 9/11 Commission. She also worked to create and fund what would become the World Trade Center Health Program, and fought to expand and reactivate the September 11th Victim Compensation Fund. Congresswoman Maloney sponsored the James Zadroga 9/11 Health Care and Compensation Act from its earliest iteration in 2006 to its passage in 2010, championing its reauthorizations in following years. Congresswoman Maloney resides in New York City.