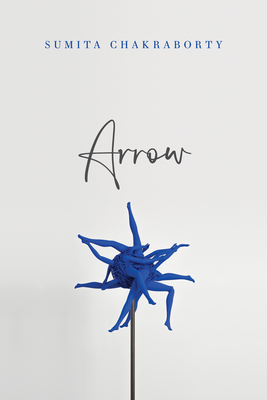 "In poems that focus on gender and race-based violence, environmental destruction, and grief, Chakraborty investigates the unknown, unexpected, and unexplained." --Publishers Weekly

"About a quarter of the way through Sumita Chakraborty's Arrow, the reader encounters an impossible poem called 'Dear, beloved.' It's impossible because who could write it? It's as large, in its way, as any epic, but as compressed as any lyric, and as beautiful as any lyric, but as foundational as any epic, but it seems to come after all things, though it seems, also, diurnal. And it's impossible also because it's a highlight, not the highlight, of Arrow, a debut as assured as any first or last book, as compelling as any, as well-made." --Shane A. McCrae
"I stand in awe of Sumita Chakraborty's visionary collection, by turns epic and compressed in scope, weighty in its tapestry-like materiality and sleekly dynamic as an arrow. The mythic and literary, here, are invigorated by seeming autobiography, which in turn gains collective energy and heft from the poems' timeless tropes and themes. Seamless and diverse in form, cosmic in subject and image, one feels in the presence of an oracular intelligence and an abiding lyric imagination." --Diane Seuss
"This powerful and endlessly mysterious collection of poems is a book of fables, of spells, of revised narratives, and of realigned songs, brightly lifted above our bodies by music that is as unpredictable as it is marvelous. The lyricism is everywhere apparent as Sumita Chakraborty addresses us, our bodies and their stories, our planet, and our sense of time itself. How does she do it? Mad Ireland hurt him into poetry, W. H. Auden wrote about Yeats, and as the hurt enters Chakraborty's language, we see that in speech violated, sounds and meanings--and even the oldest of human mysteries, like 'the etymology of love'--are redefined. All one can do is repeat: this is an endlessly compelling book. Bravo." --Ilya Kaminsky.

Sumita Chakraborty is a poet, essayist, and scholar. Her poems have appeared in Poetry, American Poetry Review, The Best American Poetry 2019, and elsewhere, and her essays and articles appear or are forthcoming in the Los Angeles Review of Books, Cultural Critique, Modernism/modernity, College Literature, and Interdisciplinary Studies in Literature and the Environment, among others. Formerly poetry editor of AGNI Magazine and art editor of At Length, she holds a BA from Wellesley College and a PhD from Emory University. She was the recipient of a Ruth Lilly and Dorothy Sargent Rosenberg fellowship from the Poetry Foundation and has been shortlisted for a Forward Prize. Originally from Massachusetts, she now lives in Michigan, where she is Helen Zell Visiting Professor in Poetry at the University of Michigan - Ann Arbor.