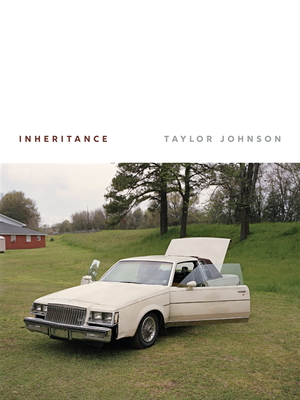 Inheritance is a black sensorium, a chapel of color and sound that speaks to spaciousness, surveillance, identity, desire, and transcendence. Influenced by everyday moments of Washington, DC living, the poems live outside of the outside and beyond the language of categorical difference, inviting anyone listening to listen a bit closer. Inheritance is about the self's struggle with definition and assumption.

Taylor Johnson is proud of being from Washington, DC. They've received fellowships and scholarships from CALLALOO, Cave Canem, Lambda Literary, Tin House, the Vermont Studio Center, Yaddo, the Conversation Literary Festival, the Bread Loaf Writers' Conference and the Bread Loaf Environmental Writers' Conference, among others. In 2017, Taylor received the Larry Neal Writers' Award from the DC Commission on the Arts and Humanities. Their poems appear in The Baffler, Indiana Review, Scalawag, and the Paris Review, among other journals and literary magazines. Their first book, Inheritance, will be published in Fall 2020 with Alice James Books. Taylor lives in southern Louisiana where they listen.