The Molecule of More: How a Single Chemical in Your Brain Drives Love, Sex, and Creativity--and Will Determine the Fate of the Human Race 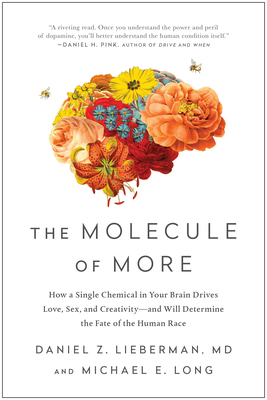 The Molecule of More: How a Single Chemical in Your Brain Drives Love, Sex, and Creativity--and Will Determine the Fate of the Human Race

Why are we obsessed with the things we want only to be bored when we get them?

Why is addiction perfectly logical to an addict?

Why does love change so quickly from passion to indifference?

Why are some people die-hard liberals and others hardcore conservatives?

Why are we always hopeful for solutions even in the darkest times—and so good at figuring them out?

The answer is found in a single chemical in your brain: dopamine. Dopamine ensured the survival of early man. Thousands of years later, it is the source of our most basic behaviors and cultural ideas—and progress itself.

Dopamine is the chemical of desire that always asks for more—more stuff, more stimulation, and more surprises. In pursuit of these things, it is undeterred by emotion, fear, or morality. Dopamine is the source of our every urge, that little bit of biology that makes an ambitious business professional sacrifice everything in pursuit of success, or that drives a satisfied spouse to risk it all for the thrill of someone new. Simply put, it is why we seek and succeed; it is why we discover and prosper. Yet, at the same time, it's why we gamble and squander.

From dopamine's point of view, it's not the having that matters. It's getting something—anything—that's new. From this understanding—the difference between possessing something versus anticipating it—we can understand in a revolutionary new way why we behave as we do in love, business, addiction, politics, religion—and we can even predict those behaviors in ourselves and others.

In The Molecule of More: How a Single Chemical in Your Brain Drives Love, Sex, and Creativity—and will Determine the Fate of the Human Race, George Washington University professor and psychiatrist Daniel Z. Lieberman, MD, and Georgetown University lecturer Michael E. Long present a potentially life-changing proposal: Much of human life has an unconsidered component that explains an array of behaviors previously thought to be unrelated, including why winners cheat, why geniuses often suffer with mental illness, why nearly all diets fail, and why the brains of liberals and conservatives really are different.

Daniel Z. Lieberman, M.D. is professor and vice chair for clinical affairs in the Department of Psychiatry and Behavioral Sciences at George Washington University. Dr. Lieberman is a Distinguished Fellow of the American Psychiatric Association, a recipient of the Caron Foundation Research Award, and he has published over 50 scientific reports on behavioral science. He has provided insight on psychiatric issues for the U.S. Department of Health and Human Services, the US Department of Commerce, and the Office of Drug and Alcohol Policy, and has discussed mental health in interviews on CNN, C-SPAN, and PBS. Dr. Lieberman studied the Great Books at St. John's College. He received his medical degree and completed his psychiatric training at New York University.

Trained as a physicist, Michael E. Long is an award-winning speechwriter, screenwriter, and playwright. As a playwright, more than 20 of his shows have been produced, most on New York stages. As a screenwriter, his honors include finalist for the grand prize in screenwriting at the Slamdance Film Festival. As a speechwriter, Mr. Long has written for members of Congress, U.S. cabinet secretaries, governors, diplomats, business executives, and presidential candidates. A popular speaker and educator, Mr. Long has addressed audiences around the world, including in a keynote at Oxford University. He teaches writing at Georgetown University, where he is a former director of writing. Mr. Long pursued undergraduate studies at Murray State University and graduate studies at Vanderbilt University.