What You Should Know About Politics . . . But Don't, Fourth Edition: A Nonpartisan Guide to the Issues That Matter 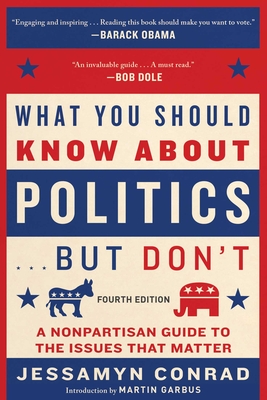 What You Should Know About Politics . . . But Don't, Fourth Edition: A Nonpartisan Guide to the Issues That Matter

By  Jessamyn Conrad , Introduction by  Martin Garbus
Paperback
$ 16.99
Out of Stock In Store (Available to Order)

“Engaging and inspiring . . . Reading this book should make you want to vote.”—Barack Obama

In a world of sound bites, deliberate misinformation, and a political scene colored by the blue versus red partisan divide, how does the average educated American find a reliable source that’s free of political spin? What You Should Know About Politics . . . But Don’t breaks it all down, issue by issue, explaining who stands for what, and why—whether it’s the economy, income inequality, Obamacare, foreign policy, education, immigration, or climate change. If you’re a Democrat, a Republican, or somewhere in between, it’s the perfect book to brush up on a single topic or read through to get a deeper understanding of the often murky world of American politics.

This is an essential volume for understanding the background to the 2020 presidential election. But it is also a book that transcends the season. It’s truly for anyone who wants to know more about the perennial issues that will continue to affect our everyday lives. The fourth edition includes an introduction by Martin Garbus discussing the themes and issues that have come to the fore during the present presidential cycle.

Jessamyn Conrad was raised in North Dakota and Minnesota. With degrees from Harvard and Cambridge Universities, she is currently pursuing a doctorate at Columbia University. She lives in New York City.

Martin Garbus is one of the country’s top trial lawyers, as well as an author and sought-after speaker, called “legendary” by Time and “one of the worlds finest trial lawyers” by The Guardian. An expert at every level of civil and criminal trial, and litigation, he has appeared before the United States Supreme Court in leading First Amendment cases, and his cases have established precedents there and in other courts throughout the country. An international observer in foreign elections, he was also selected by President Jimmy Carter to observe and report on the elections in Venezuela and Nicaragua.