Socialism: Past and Future 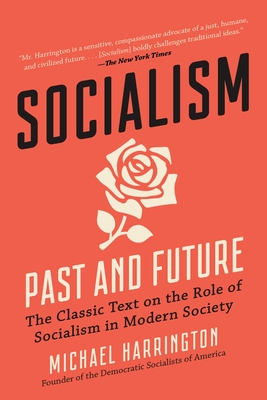 Socialism: Past and Future

By  Michael Harrington
Paperback
$ 17.99
On Our Shelves Now

“Mr. Harrington is a sensitive, compassionate advocate of a just, humane, and civilized future. . . .  [Socialism] has a lively air of optimism and boldly challenges traditional ideas.”—New York Times

A Thoughtful, Compassionate Treatise on the Role of Democratic Socialism in Modern Society

On learning his cancer was inoperable, renowned intellectual Michael Harrington simply asked the doctors to keep him alive long enough “to complete a summary statement of the themes I had thought of throughout an activist life.” And they did. Socialism: Past and Future is prominent thinker and democratic socialist Michael Harrington’s final contribution: a thoughtful, intelligent, and compassionate treatise on the role of socialism both past and present in modern society. He is convincing in his application of classic socialist theory to current economic situations and modern political systems, and he examines the validity of the idea of “visionary gradualism” in bringing about a socialist agenda. He believes that if freedom and justice are to survive into the next century, the socialist movement will be a critical factor. This is the definitive text on the role of socialism throughout history which Publishers Weekly calls “succinct, readable” and the Los Angeles Times Book Review says is “magnificent . . . more than anything, this is a book about hope.”

In this passionate book, the late Michael Harrington draws on a lifetime of thinking and politicking to reject much that has passed for socialism and to define the new forms that will make it the only “hope for human freedom and justice” (Foreign Affairs) in the twenty-first century.

Michael Harrington was an American democratic socialist, bestselling writer, political activist, professor of political science, NPR commentator, atheist, and founder of the Democratic Socialists of America. He is also credited with coining the term “neoconservatism” in the 1970s. A major figure of the American left, Harrington is the author of eighteen books including The Other America: Poverty in the United States, The Social-Industrial Complex, The Twilight of Capitalism, and his autobiography The Long Distance Runner. He passed away in 1989.