Costalegre: A Novel Inspired By Peggy Guggenheim and Her Daughter, Pegeen 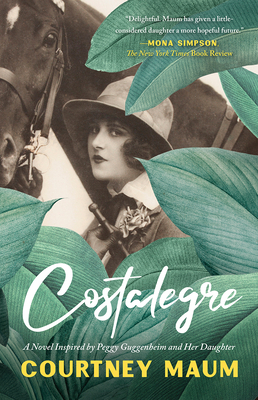 Costalegre: A Novel Inspired By Peggy Guggenheim and Her Daughter, Pegeen

By  Courtney Maum
Paperback
$ 15.95
On Our Shelves Now

One of Glamour's Best Books of the Decade and a Best Book of Summer at AM New York, Moda Operandi, GOOP, Publishers Weekly, TIME, Southern Living, and Thrillist.

Inspired by the real-life relationship between the heiress Peggy Guggenheim and her daughter, Pegeen, Costalegre is the tender and touching story of a privileged teenager who has everything a girl could wish for, except a mother who loves her back.

It is 1937, and Europe is on the brink of war. Hitler is circulating a most-wanted list of artists, writers, and thinkers whose work is deemed a threat to the new regime. To prevent the destruction of her favorite art (and artists), American heiress and modern art collector Leonora Calaway begins swiftly chartering boats and planes for an elite group of surrealists to Costalegre, a mysterious resort in the Mexican jungle, where she has a home.

The story of what happens to these artists is told by Lara, Leonora’s neglected fifteen-year-old daughter, who has been pulled out of school to follow her mother to Mexico. “I am destined,” Lara writes, “for a destiny I haven’t had the chance to meet.” Inspired by the beautiful and talented Charlotte, alongside an eccentric menagerie of other surrealists, Lara begins to discover herself as an artist. In days filled with writing, dreaming, horseback riding, and exploring her new home, she grapples with her own ambition, hoping to find a sensitive ear in her mother but often finding herself alone. It’s not till she meets the outcast sculptor Jack Klinger, a much older man who has already been living in Costalegre for some time, that Lara thinks she might have found the understanding she so badly craves.

Courtney Maum is the author of the novels Touch and I Am Having So Much Fun Here Without You, the chapbook Notes from Mexico, and the handbook Before and After the Book Deal: A Writer’s Guide to Finishing, Publishing, Promoting, and Surviving Your First Book. Her writing and essays have been widely published in such outlets as BuzzFeed; The New York Times; O, The Oprah Magazine; and Modern Loss. She is the founder of the learning collaborative The Cabins, and she also works as a product and cosmetic shade namer from her home in Connecticut.