Things We Didn't Talk About When I Was A Girl: A Memoir 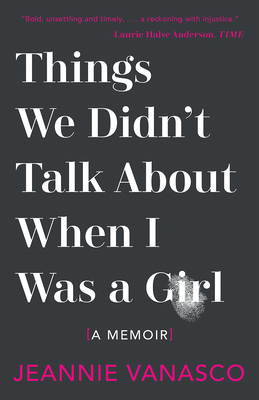 Things We Didn't Talk About When I Was A Girl: A Memoir

By  Jeannie Vanasco
Paperback
$ 16.95
Out of Stock In Store (Click to Order)

A New York Times Editors’ Choice and Best Book of the Year at TIME, Esquire, Amazon, Kirkus, and Electric Literature

Jeannie Vanasco has had the same nightmare since she was a teenager. It is always about him: one of her closest high school friends, a boy named Mark. A boy who raped her. When her nightmares worsen, Jeannie decides—after fourteen years of silence—to reach out to Mark. He agrees to talk on the record and meet in person.

Jeannie details her friendship with Mark before and after the assault, asking the brave and urgent question: Is it possible for a good person to commit a terrible act? Jeannie interviews Mark, exploring how rape has impacted his life as well as her own.

Unflinching and courageous, Things We Didn’t Talk About When I Was a Girl is part memoir, part true crime record, and part testament to the strength of female friendships—a recounting and reckoning that will inspire us to ask harder questions, push towards deeper understanding, and continue a necessary and long overdue conversation.

Jeannie Vanasco is the author of The Glass Eye: A Memoir (Tin House Books, 2017). Her work has appeared in The Believer, the New York Times Modern Love, Tin House, and elsewhere. She lives in Baltimore and is an assistant professor at Towson University. Things We Didn't Talk About When I Was a Girl is her second book.