The Way She Feels: My Life on the Borderline in Pictures and Pieces 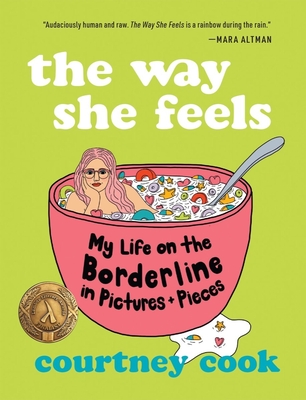 The Way She Feels: My Life on the Borderline in Pictures and Pieces

“Audaciously human and raw. The Way She Feels is a rainbow during the rain.” —Mara Altman

A witty and one-of-a-kind debut graphic memoir detailing and drawing the life of a girl with borderline personality disorder finding her way—and herself—one day at a time.

What does it feel like to fall in love too hard and too fast, to hate yourself in equal and opposite measure? To live in such fear of rejection that you drive friends and lovers away? Welcome to my world. I’m Courtney, and I have borderline personality disorder (BPD), along with over four million other people in the United States. Though I’ve shown every classic symptom of the disorder since childhood, I wasn’t properly diagnosed until nearly a decade later, because the prevailing theory is that most people simply “grow out of it.” Not me.

In my illustrated memoir, The Way She Feels: My Life on the Borderline in Pictures and Pieces, I share what it’s been like to live and love with this disorder. Not just the hospitalizations, treatments, and residential therapy, but the moments I found comfort in cereal, the color pink, or mini corndogs; the days I couldn’t style my hair because I thought the blow-dryer was going to hurt me; the peace I found when someone I love held me. This is a book about vulnerability, honesty, acceptance, and how to speak openly—not only with doctors, co-patients, friends, family, or partners, but also with ourselves.