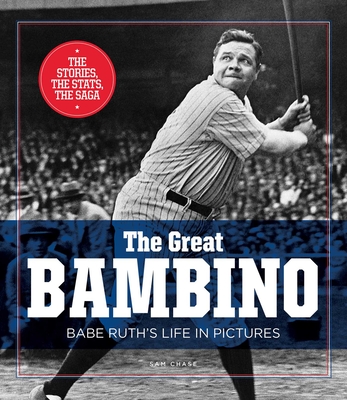 The Great Bambino, The Sultan of Swat, The Titan of Terror...Babe Ruth was larger than life! Here is an illustrated history of baseball's most iconic figure.

Try to sum up the career of baseball legend Babe Ruth in fewer than 20 words, and the first two sentences on the Hall of Fame plaque that hangs in Cooperstown does so quite succinctly: Greatest drawing card in history of baseball. Holder of many home run and other batting records.The man known as the Great Bambino, however, represented far more than just numbers. As former teammate Joe Dugan once stated, “To understand him you had to understand this: He wasn’t human.” Offering the definitive look at Ruth’s life both on and off the field, from his rough childhood through the larger-than-life persona he would eventually become,  The Great Bambino is an intimate and beautifully illustrated portrait of a true American icon.

Sam Chase's career in sports media peaked at its outset when he hosted trivia show Beat The Sam on Eastern Maine drive time sports radio as an adolescent. He's merely dabbled since then, having written and edited for Tennis Magazine, Athlon's NFL Draft Guide, and Sports Illustrated's gambling vertical. Sam lives in Chicago with his girlfriend Sophie and their earless cat Josie.