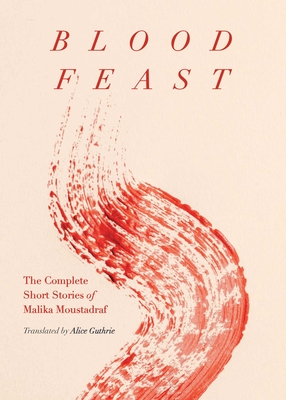 By  Malika Moustadraf , Translator  Alice Guthrie
$ 15.95
Likely On Our Shelves

A cult classic by Morocco's foremost writer of life on the margins.

Malika Moustadraf (1969-2006) is a feminist icon in contemporary Moroccan literature, celebrated for her stark interrogation of gender and sexuality in North Africa.

Blood Feast is the complete collection of Moustadraf's published short fiction: haunting, visceral stories by a master of the genre. A teenage girl suffers through a dystopian rite of passage​,​ a man with kidney disease makes desperate attempts to secure treatment​, and a mother schemes to ensure her daughter passes a virginity test.

Delighting in vibrant sensory detail and rich slang, Moustadraf takes an unflinching look at the gendered body, social class, illness, double standards, and desire, as lived by a diverse cast of characters. Blood Feast is a sharp provocation to patriarchal power and a celebration of the life and genius of one of Morocco's preeminent writers.

Malika Moustadraf (1969-2006) was a preeminent arabophone writer from Casablanca, Morocco. She died at just thirty-seven, leaving behind a semiautobiographical novel and a collection of short stories. Four other short stories were published posthumously by the Moroccan literary journal QS, and are included in this collection.Particularly celebrated by other writers for her distinctive style and experimental language, Moustadraf was equally admired for her unflinching work about life in the margins, and her centering of the female body and experience. But she was also persecuted throughout her short life for this taboo-busting subject matter and these feminist instincts. Moustadraf suffered from chronic kidney failure, preventing her from attending higher education; an intense engagement with the written word and experimentation with hybrid language became her equivalent of an academic discipline. Moustadraf was an exacting social critic, and her friends recall her fierce intellect, her humour, and her feminist rage. There are a number of press articles she wrote as well as published interviews and letters that illustrate these qualities well.Alice Guthrie is an independent translator, editor, and curator, specializing in contemporary Arabic writing. Her work often focuses on subaltern voices and activist art. She is currently compiling the first ever anthology of LGBTQIA+ Arabic writing, set to appear in parallel Arabic and English editions. She teaches literary translation at the University of Exeter and the University of Birmingham.