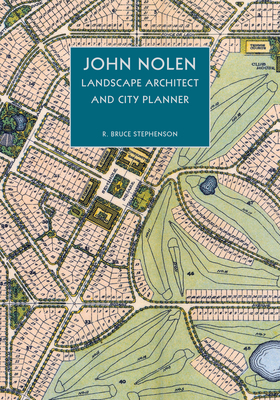 By  R. Bruce Stephenson
Paperback
$ 28.00
On Our Shelves Now

Winner, J. B. Jackson Book Prize from the Foundation for Landscape StudiesIn this insightful biography, Bruce Stephenson analyzes the details of John Nolen's experiments, illuminating the planning principles he used in laying out communities from Mariemont, Ohio, to Venice, Florida. Stephenson's conclusion discusses the potential of Nolen's work as a model of a sustainable vision relevant to American civic culture today.John Nolen (1869-1937) studied economics, philosophy, and public administration at the Wharton School of the University of Pennsylvania, where his keen intelligence and remarkable administrative abilities were immediately recognized. In 1903, at the age of thirty-four, Nolen enrolled in the new Harvard University program in landscape architecture, studying under Frederick Law Olmsted Jr. and Arthur Shurcliff. Two years later, Nolen opened his office in Harvard Square.Over the course of his career, Nolen and his firm completed more than 400 projects, including comprehensive plans for twenty-nine cities and twenty-seven new towns, all of them in the United States. Like other reformers of the Progressive Era, Nolen looked to Europe for models to structure the rapid urbanization defining modern life into more efficient and livable form. Nolen's mutually influential relationship with Raymond Unwin, England's preeminent garden city planner, typified the "Atlantic Crossings" that produced a host of intensely interesting planning experiments in England, Europe, and the United States during the first decades of the twentieth century. "Nolen has never received the systematic assessment that he deserves despite being the subject of so much writing--the Stephenson biography stands alone. The author makes a convincing case that Nolen was a pivotal figure in the profession of city planning and that his contributions were uniquely situated to bridge the fields of landscape architecture and planning. This is an exceptionally fine work."Christopher Silver, author of Planning the Megacity: Jakarta in the Twentieth Century"The long overdue and definitive biography of one of America's most prominent and influential urbanists. . . . Stephenson effectively positions Nolen between the classical practitioners of the nineteenth century and the modern ecological focus of the twentieth century (which he helped to establish)."Keith N. Morgan, coauthor of Community by Design: The Olmsted Office and the Development of Brookline, MassachusettsIn this deeply researched and richly detailed biography . . . Stephenson focuses attention on a figure who has been curiously understudied and who arguably deserves additional scrutiny on several topics―from his ideas about race and class to his proto-environmentalism, all key interests among Progressive reformers.Journal of Southern HistoryStephenson offers a richly developed biographical portrait of Nolen interwoven with a detailed discussion of his numerous planning projects. . . . The] biographical component allows the reader to see how Nolen's life experiences shaped his professional work. Especially impressive is Stephenson's discussion of Nolen as a progressive during his work at ASEUT and his early travels to Europe. . . . The numerous color photographs make the book a visual delight and the excellent index makes referencing the book a breeze.Journal of Planning History.

R. BRUCE STEPHENSON is director of the department of Environmental Studies and Sustainable Urbanism at Rollins College, a landscape design consultant, author of Visions of Eden: Environmentalism and Urban Planning in St. Petersburg, Florida, 1900-1995, and contributing scholar to the Florida Humanities film series on community, Imagining a New Florida.