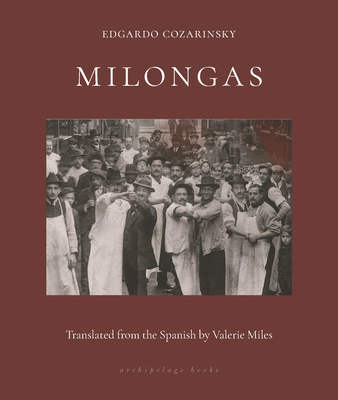 By  Edgardo Cozarinsky , Translated by  Valerie Miles , Introduction by  Alberto Manguel
$ 18.00
Out of Stock In Store (Available to Order)

With an introduction by award-winning author Alberto Manguel, Milongas is Edgardo Cozarinsky's love letter to tango, and the diverse array of people who give it life.

From tango’s origins in the gritty bars of Buenos Aires, to milongas tucked away in the crypt of a London Church, a café in Kraków, or the quays of the Seine, Cozarinsky guides us through a shape-shifting dance’s phantasmagoric past.

In neighborhood dance halls vibrant and alive through the early hours of the morning, where young and old, foreign and native, novice and master come together to traverse borders, demographics, and social mores, “it is impossible to distinguish the dance from the dancer.”

As conspiratorial as he is candid, Cozarinsky shares the secrets and culture of this timeless dance with us through glimmering anecdote, to celebrate its traditions, evolution, and the devotees who give it life.

Edgardo Cozarinsky is an Argentine writer and film director. Best known for his collection Urban Voodoo, an instant cult classic, with prologues by both Susan Sontag and Guillermo Cabrera Infante, Cozarinsky is also the author of the collection The Bride from Odessa, a novella, The Moldavian Pimp, and a large body of prize-winning short stories and essays. In 2018 Cozarinsky was awarded the prestigious Gabriel García Márquez short story prize for his story "en el ultimo trago nos vamos." As a film maker, his movies have received prizes and praise in the Jeu de Paume in Paris, and his film Lejos de dónde (Far from Where) won the Premio de la Academía Argentina de Letras in 2011.


Translator Bio: Valerie Miles is an American writer, editor and translator, and lives in Barcelona. In 2003, she co-founded Granta en español. She writes and reviews for the New York Times, the Paris Review, La Nación, La Vanguardia and el ABC, among others. She translates from the Spanish and Catalan and is a professor in the postgraduate program for literary translation at Pompeu Fabra University.