Le Griffon and the Huron Islands - 1679: Our Story of Exploration and Discovery 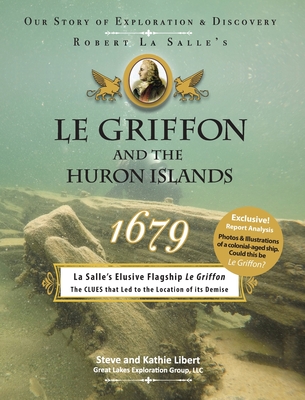 Le Griffon and the Huron Islands - 1679: Our Story of Exploration and Discovery

By  Steve And Kathie Libert
$ 34.95
Out of Stock In Store (Available to Order)

In 1679, the French ship Le Griffon mysteriously vanished. Was it lost in a violent storm or robbed of its valuable cargo of furs and set ablaze? No one knows, but historians are quite certain the ship found its final resting place on the bottom of the Great Lakes.

Now after centuries of mystery and misinformation, Steve and Kathie Libert reveal that Le Griffon likely met her final fate among the Huron Islands in Lake Michigan, northeast of Green Bay, Wisconsin. Their research placed her final moments near these islands, precisely where the Liberts discovered a colonial-age shipwreck. Could this be La Salle's Le Griffon?

Le Griffon's disappearance became an unsolved mystery for French explorer Robert La Salle, who searched for her whereabouts to no avail. Ironically, if the ship-cursed by local Indian tribes-proves to be Le Griffon, she lays under tribal waters, adding to the mystique of her story. Using primary source documents, the Liberts detail their historical journey of exploration and discovery in solving the first Great Lakes maritime mystery. Many history enthusiasts have patiently waited for this mythical creature to magically raise her eagle head and lioness body from the depths to continue on with her voyage. After nearly 340 years of unanswered questions and more than a dozen unsubstantiated claims of her discovery, Le Griffon can begin to ply the waters - at least in our imaginations.