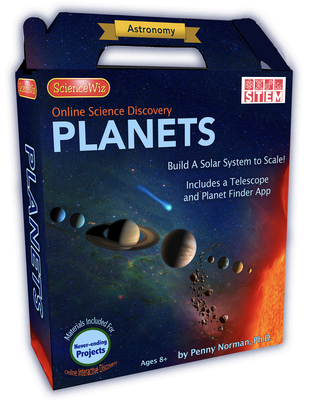 ScienceWiz(R) Online Discovery Planets includes a digital flip book that provides a grand tour of the solar system. It integrates hands-on projects and celestial observations with breathtaking online materials. These include videos, simulations, Interactive 3D models and and deep dives into the centers of the gas and ice giants. Watch an incredible 4K video of the actual surface of Mars, composited from data captured by NASA's Mars rovers. This is our first ever high resolution view of another world Listen to the profound and stunning video narration of Carl Sagan's "Pale Blue Dot." Take a deep dive into Saturn's interior to watch gigantic diamond ice burgs float in a liquid diamond sea. Learn about the liquid oceans found to be buried underground on numerous moons and even beneath the frozen surface of the dwarf planet Pluto. Do some of these mineral rich oceans harbor life? The race is on to find out.

The kit includes a handle box for easy storage and transport, as well as materials for each project.