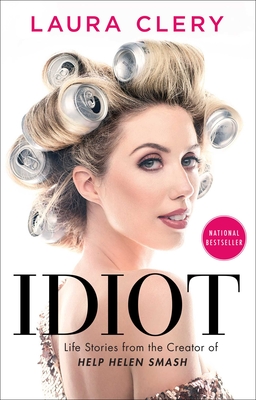 From nationally bestselling author, YouTube star, and Facebook Video sensation Laura Clery comes a collection of comedic essays that paint “an honest, complicated portrait of how your life can change” (SheKnows).

Laura Clery makes a living by sharing inappropriate comedy sketches with millions of strangers on the internet. She writes songs about her anatomy, talks trash about her one-eyed rescue pug, and sexually harasses her husband, Stephen. And it pays the bills!

Now, in her first-ever book, Laura recounts how she went from being a dangerously impulsive, broke, unemployable, suicidal, cocaine-addicted narcissist, crippled by fear and hopping from one toxic romance to the next…to a more-happy-than-not, somewhat rational, meditating, vegan yogi with good credit, a great marriage, a fantastic career, and four unfortunate-looking rescue animals. Still, above all, Laura remains an amazingly talented, adorable, and vulnerable, self-described…Idiot.

With her signature brand of offbeat, no-holds-barred humor, Idiot introduces you to a wildly original—and undeniably relatable—new voice.

Laura Clery is an actress, influencer, and comedian best known for posting comedy sketches and vlogs about her day-to-day life to Facebook, TikTok, Instagram, and YouTube, where she has a combined 22 million followers and upwards of 10 billion views. She is the author of Idiot and Idiots. Clery lives in Los Angeles with her husband, son, daughter, and her one-eyed pug, Oliver.