I Ain't Doin' It: Unfiltered Thoughts From a Sarcastic Southern Sweetheart 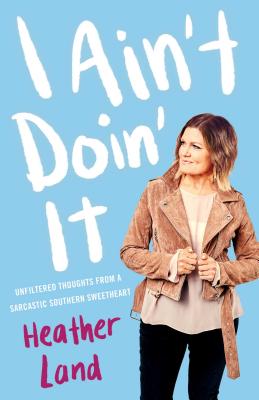 I Ain't Doin' It: Unfiltered Thoughts From a Sarcastic Southern Sweetheart

Social media comedian Heather Land uses her trademark sassy, laugh-out-loud humor to remind us of the many ways that real life can be really funny.

Heather Land has something to say about almost everything in life—the unbelievable, inconceivable, and downright frustrating—and why she “ain’t doin’ it.” In her first book, Heather shines a light on the (occasional) ridiculousness of life through a series of hilarious essays, dishing on everything from Walmart and ex-husbands to Southern beauty pageants and unfortunate trips to the gynecologist.

I Ain’t Doin’ It reminds us that when it comes to life’s messy moments, it’s all about perspective—and that we too can say, I ain’t doin’ it!

Perfect for fans of Jim Gaffigan, Anjelah Johnson, and Brian Regan, I Ain’t Doin' It is a fun, breezy read for anyone who appreciates someone who tells it like it is and wants to embrace the lighter side of life.

Heather Land has made herself a household name thanks to her uniquely Southern wit, peppered with a dash of sassy sarcasm and a whole lot of seasoned truth. Blending humor with reality has endeared her to millions, but it is Heather’s ability to laugh at herself that makes her not only relatable, but downright lovable. Her stories and songs reach deep into the hearts of her audiences, reminding us of the many ways that real life can be really hard and really funny. Her ongoing series of “I Ain’t Doin’ It” videos has become a viral phenomenon with millions of views. Heather is the author of I Ain’t Doin’ It, the mom of two amazing children, and currently lives in Nashville, Tennessee.