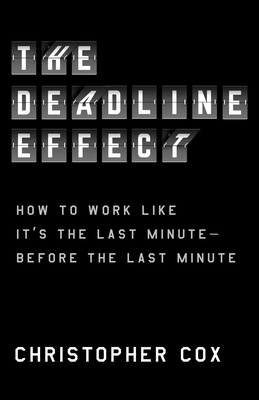 By  Christopher Cox
Hardcover
$ 28.00
On Our Shelves Now

In the tradition of Charles Duhigg’s The Power of Habit, a wise and fascinating book that shows us how “we can make deadlines work for us instead of the other way around” (The Wall Street Journal).

Perfectionists and procrastinators alike agree—it’s natural to dread a deadline. Whether you are completing a masterpiece or just checking off an overwhelming to-do list, the ticking clock signals despair. Christopher Cox knows the panic of the looming deadline all too well—as a magazine editor, he has spent years overseeing writers and journalists who couldn’t meet a deadline to save their lives. After putting in a few too many late nights in the newsroom, he became determined to learn the secret of managing deadlines. He set off to observe nine different organizations as they approached a high-pressure deadline. Along the way, Cox made an even greater discovery: these experts didn’t just meet their big deadlines—they became more focused, productive, and creative in the process.

An entertaining blend of “behavioral science, psychological theory, and academic studies with compelling storytelling and descriptive case studies” (Financial Times), The Deadline Effect reveals the time-management strategies these teams used to guarantee success while staying on schedule: a restaurant opening for the first time, a ski resort covering an entire mountain in snow, a farm growing enough lilies in time for Easter, and more. Cox explains how to use deadlines to our advantage, the dynamics of teams and customers, and techniques for using deadlines to make better, more effective decisions.

Christopher Cox has written about politics, business, books, and science for The New York Times Magazine, GQ, Harper’s, Wired, and Slate. In 2020, he was named a Knight Science Journalism Fellow at MIT and a visiting scholar at NYU’s Arthur L. Carter Journalism Institute. He was formerly the chief editor of Harper’s Magazine and executive editor of GQ, where he worked on stories that won the Pulitzer Prize, the PEN Literary Award for Journalism, and multiple National Magazine Awards. Cox was raised in Atlanta, Georgia, and went to college at Harvard University and graduate school at the University of Cambridge. He lives in Brooklyn with his wife, Georgia, and their two daughters, Carson and Alice.