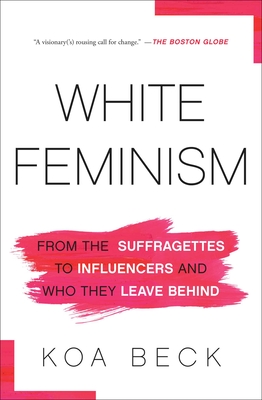 Written “with passion and insight about the knotted history of racism within women’s movements and feminist culture” (Rebecca Traister, New York Times bestselling author), this whip-smart, timely, and impassioned call for change is perfect for fans of Good and Mad and Hood Feminism.

Addressing today’s conversation about race, empowerment, and inclusion in America, Koa Beck, writer and former editor-in-chief of Jezebel, boldly examines the history of feminism, from the true mission of the suffragists to the rise of corporate feminism with clear-eyed scrutiny and meticulous detail. She also examines overlooked communities—including Native American, Muslim, transgender, and more—and their ongoing struggles for social change.

With “intellectually smart and emotionally intelligent” (Patrisse Cullors, New York Times bestselling author and Black Lives Matter cofounder) writing, Beck meticulously documents how elitism and racial prejudice have driven the narrative of feminist discourse. Blending pop culture, primary historical research, and first-hand storytelling, she shows us how we have shut women out of the movement, and what we can do to correct our course for a new generation.

Combining a scholar’s understanding with hard data and razor-sharp cultural commentary, White Feminism “is a rousing blueprint for a more inclusive ‘new era of feminism’” (The Boston Globe).

Koa Beck is the former editor-in-chief of Jezebel. Previously, she was the executive editor at Vogue and cohost of “The #MeToo Memos” on WNYC’s The Takeaway. Her writing has appeared in The Atlantic, The New York Observer, The Guardian, and Esquire, among others. For her reporting prowess, she has been interviewed by the BBC and has appeared on many panels about gender and identity at the Harvard Kennedy School at Harvard University, the Metropolitan Museum of Art, the Brooklyn Historical Society, and Columbia Journalism School to name a few. She lives in Los Angeles.