Sentient: How Animals Illuminate the Wonder of Our Human Senses 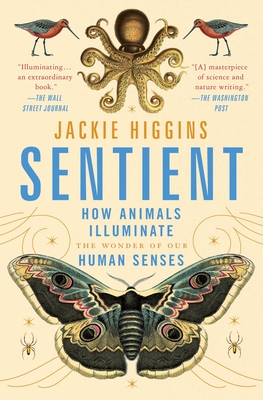 Sentient: How Animals Illuminate the Wonder of Our Human Senses

By  Jackie Higgins
Paperback
$ 18.99
Pre-Order (Not Yet Published)

Perfect for fans of The Soul of an Octopus and The Genius of Birds, this “revelatory book” (Sy Montgomery, New York Times bestselling author) explores how we process the world around us through the lens of the incredible sensory capabilities of thirteen animals, revealing that we are not limited to merely five senses.

There is a scientific revolution stirring in the field of human perception. Research has shown that the extraordinary sensory powers of our animal friends can help us better understand the same powers that lie dormant within us.

From the harlequin mantis shrimp with its ability to see a vast range of colors, to the bloodhound and its hundreds of millions of scent receptors; from the orb-weaving spider whose eyes recognize not only space but time, to the cheetah whose ears are responsible for its perfect agility, these astonishing animals hold the key to better understanding how we make sense of the world around us.

“An appealingly written, enlightening, and sometimes eerie journey into the extraordinary possibilities for the human senses” (Kirkus Reviews, starred review), Sentient will change the way you look at humanity.

Jackie Higgins is a graduate of Oxford University with an MA in zoology and has worked for Oxford Scientific Films for over a decade, along with National Geographic, PBS Nova, and the Discovery Channel. She has also written, directed, and produced films at the BBC Science Department. She lives in London.