From the Ashes: My Story of Being Indigenous, Homeless, and Finding My Way 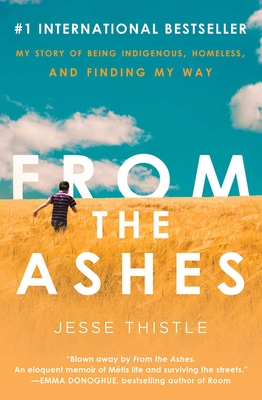 From the Ashes: My Story of Being Indigenous, Homeless, and Finding My Way

By  Jesse Thistle
Paperback
$ 17.00
Out of Stock In Store (Available to Order)

This #1 internationally bestselling and award-winning memoir about overcoming trauma, prejudice, and addiction by a Métis-Cree author as he struggles to find a way back to himself and his Indigenous culture is “an illuminating, inside account of homelessness, a study of survival and freedom” (Amanda Lindhout, bestselling coauthor of A House in the Sky).

Abandoned by his parents as a toddler, Jesse Thistle and his two brothers were cut off from all they knew when they were placed in the foster care system. Eventually placed with their paternal grandparents, the children often clashed with their tough-love attitude. Worse, the ghost of Jesse’s drug-addicted father seemed to haunt the memories of every member of the family.

Soon, Jesse succumbed to a self-destructive cycle of drug and alcohol addiction and petty crime, resulting in more than a decade living on and off the streets. Facing struggles many of us cannot even imagine, Jesse knew he would die unless he turned his life around. Through sheer perseverance and newfound love, he managed to find his way back into the loving embrace of his Indigenous culture and family.

Now, in this heart-wrenching and triumphant memoir, Jesse Thistle honestly and fearlessly divulges his painful past, the abuse he endured, and the tragic truth about his parents. An eloquent exploration of the dangerous impact of prejudice and racism, From the Ashes is ultimately a celebration of love and “a story of courage and resilience certain to strike a chord with readers from many backgrounds” (Library Journal).

Jesse Thistle is Métis-Cree, from Prince Albert, Saskatchewan, and an assistant professor in Humanities at York University in Toronto. From the Ashes was the top-selling Canadian book in 2020, the winner of the Kobo Emerging Writer Prize for Nonfiction, Indigenous Voices Award, and High Plains Book Award, and also a finalist for CBC Canada Reads. Jesse won a Governor General’s Academic Medal in 2016, and is a Pierre Elliot Trudeau Foundation Scholar and a Vanier Scholar. A frequent keynote speaker, he lives in Hamilton, Ontario, with his wife, Lucie, and is at work on multiple projects, including his next book. Visit him at JesseThistle.com.