A Quantum Life: My Unlikely Journey from the Street to the Stars 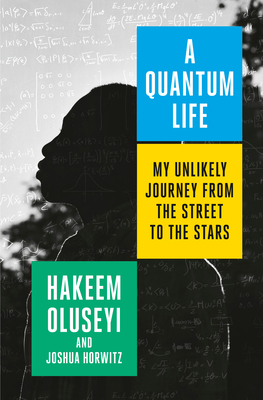 A Quantum Life: My Unlikely Journey from the Street to the Stars

In this inspiring coming-of-age memoir, a world-renowned astrophysicist emerges from an impoverished childhood and crime-filled adolescence to ascend through the top ranks of research physics.

NAMED ONE OF THE BEST BOOKS OF THE YEAR BY KIRKUS REVIEWS • “You’ll encounter one extraordinary turn of events after another, as the extraordinary chess player, puzzle solver, and occasional grifter works his way from grinding poverty and deep despair to worldwide acclaim as a physicist.”—Bill Nye, CEO of The Planetary Society

Navigating poverty, violence, and instability, a young James Plummer had two guiding stars—a genius IQ and a love of science. But a bookish nerd is a soft target, and James faced years of bullying and abuse. As he struggled to survive his childhood in some of the country’s toughest urban neighborhoods in New Orleans, Houston, and LA, and later in the equally poor backwoods of Mississippi, he adopted the persona of “gangsta nerd”—dealing weed in juke joints while winning state science fairs with computer programs that model Einstein’s theory of relativity.

Once admitted to the elite physics PhD program at Stanford University, James found himself pulled between the promise of a bright future and a dangerous crack cocaine habit he developed in college. With the encouragement of his mentor and the sole Black professor in the physics department, James confronted his personal demons as well as the entrenched racism and classism of the scientific establishment. When he finally seized his dream of a life in astrophysics, he adopted a new name, Hakeem Muata Oluseyi, to honor his African ancestors.

Alternately heartbreaking and hopeful, A Quantum Life narrates one man’s remarkable quest across an ever-expanding universe filled with entanglement and choice.

Hakeem Oluseyi is an American astrophysicist, cosmologist, inventor, educator, television personality, and public speaker. He was a Distinguished Professor of Aerospace, Physics and Space Sciences at the Florida Institute of Technology from 2007 to 2019 and has held professorships at MIT, the University of California at Berkeley, the University of Washington, and the University of Cape Town. Dr. Oluseyi has also served as the Space Science Education Manager of the Science Mission Directorate at NASA headquarters in Washington, D.C., chief science officer of Discovery Science, and president of the National Society of Black Physicists. He has appeared in science and engineering programming on Netflix, Discovery Science, NatGeo, PBS, BBC, and more. Dr. Oluseyi is an inductee of the National Academy of Inventors, the National Black College Alumni Hall of Fame, and the Sigma Pi Sigma physics honor society.

Joshua Horwitz is the author of multiple nonfiction books, including the New York Times bestseller War of the Whales: A True Story, which won the PEN/E.O. Wilson Literary Science Writing Award.