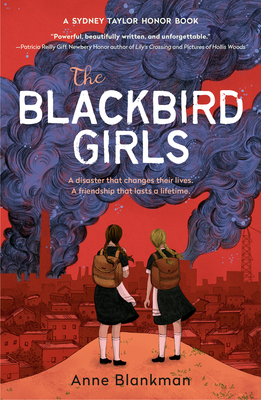 By  Anne Blankman
Paperback
$ 8.99
Likely On Our Shelves

Like Ruta Sepetys for middle grade, Anne Blankman pens a poignant and timeless story of friendship that twines together moments in underexplored history.

On a spring morning, neighbors Valentina Kaplan and Oksana Savchenko wake up to an angry red sky. A reactor at the nuclear power plant where their fathers work--Chernobyl--has exploded. Before they know it, the two girls, who've always been enemies, find themselves on a train bound for Leningrad to stay with Valentina's estranged grandmother, Rita Grigorievna. In their new lives in Leningrad, they begin to learn what it means to trust another person. Oksana must face the lies her parents told her all her life. Valentina must keep her grandmother's secret, one that could put all their lives in danger. And both of them discover something they've wished for: a best friend. But how far would you go to save your best friend's life? Would you risk your own?

Told in alternating perspectives among three girls--Valentina and Oksana in 1986 and Rifka in 1941--this story shows that hatred, intolerance, and oppression are no match for the power of true friendship.

Anne Blankman has loved to write stories for as long as she can remember. She grew up in Niskayuna, New York, where she met a classmate who had survived Chernobyl and who eventually inspired Anne to write The Blackbird Girls. They are still friends to this day. Currently, Anne lives in Richmond, Virginia with her husband, Mike, her daughter, Kirsten, and two rescue cats. For several years, she worked as a children's librarian but now she writes full-time. When she isn't writing, Anne likes to spend time with her family, read, travel, knit, and go for long runs. She loves hearing from readers, and you can visit her at anneblankman.com or @AnneBlankman.