The 80/80 Marriage: A New Model for a Happier, Stronger Relationship 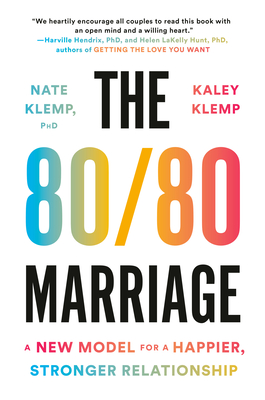 The 80/80 Marriage: A New Model for a Happier, Stronger Relationship

An accessible, transformative guide for couples seeking greater love, connection, and intimacy in our modern world

Nate and Kaley Klemp were both successful in their careers, consulting for high-powered companies around the world. Their work as mindfulness and leadership experts, however, often fell to the wayside when they came home in the evening, only to end up fighting about fairness in their marriage. They believed in a model where each partner contributed equally and fairness ruled, but, in reality, they were finding that balance near impossible to achieve.

From this frustration, they developed the idea of the 80/80 marriage, a new model for balancing career, family, and love. The 80/80 Marriage pushes couples beyond the limited idea of "fairness" toward a new model grounded on radical generosity and shared success, one that calls for each partner to contribute 80 percent to build the strongest possible relationship. Drawing from more than one hundred interviews with couples from all walks of life, stories from business and pop culture, scientific studies, and ancient philosophical insights, husband-and-wife team Nate and Kaley Klemp pinpoint exactly what's not working in modern marriage. Their 80/80 model of marriage provides practical, powerful solutions to transform your relationship and open up space for greater love and connection.

Nate Klemp, PhD, is a former philosophy professor and a founding partner at Mindful. He is coauthor of Start Here, a New York Times bestselling guide to mindfulness in the real world. Nate’s articles appear regularly in Inc., Fast Company, Mindful, and other leading publications. He received his BA and MA from Stanford University, and his PhD from Princeton University.

Kaley Klemp is a highly sought-after executive coach. She is an experienced facilitator, specializing in building trusting and synergistic teams. She is also an Enneagram expert, TEDx speaker, and coauthor of The 15 Commitments of Conscious Leadership. A favorite with Young Presidents Organization (YPO) forums and chapters, Kaley has led retreats for more than 350 forums throughout the world. She received both her BA and MA from Stanford University.