How to Hear the Universe: Gaby González and the Search for Einstein's Ripples in Space-Time 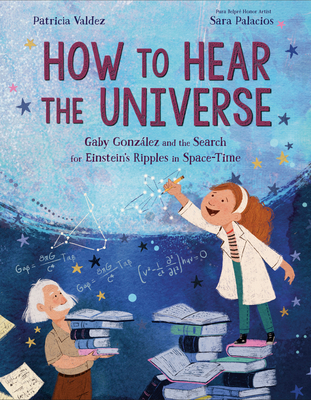 How to Hear the Universe: Gaby González and the Search for Einstein's Ripples in Space-Time

By  Patricia Valdez , Illustrated By  Sara Palacios
Hardcover
$ 17.99
Out of Stock In Store

Discover new realms of outer space in this picture book biography of scientist Gabriela Gonzalez, who immigrated to America and became a ground-breaking scientist. Written by a molecular biologist and illustrated by an award-winning artist, this stunning picture book explores science, space, and history.

In 1916, Albert Einstein had a theory. He thought that somewhere out in the universe, there were collisions in space. These collisions could cause little sound waves in the fabric of space-time that might carry many secrets of the distant universe. But it was only a theory. He could not prove it in his lifetime.

Many years later, an immigrant scientist named Gabriela Gonzalez asked the same questions. Armed with modern technology, she joined a team of physicists who set out to prove Einstein's theory. At first, there was nothing. But then... they heard a sound. Gabriela and her team examined, and measured, and re-measured until they were sure.

Patricia Valdez is a scientist who loves writing for children. She earned her Ph.D. in Molecular and Cell Biology from the University of California, Berkeley and currently works at the National Institutes of Health. Originally from Texas, she now lives in the Washington, D.C. area.

Sara Palacios was the recipient of the 2012 Pura Belpré Illustrator Honor Award for her work on Marisol McDonald Doesn't Match. A native of Mexico, Sara graduated from the National Institute of Fine Arts in Mexico City and went on to earn BFA and MFA degrees in illustration from the Academy of Art University in San Francisco. She illustrates for companies in both the United States and Mexico.