The Return of Polio to the USA 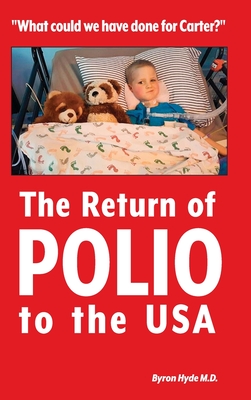 The Return of Polio to the USA

This important work is well-researched, hard-hitting and easy to read. It exposes the gross oversight of health authorities in the USA, especially the CDC (Centers for Disease Control in Atlanta), in not recognizing or responding adequately to the growing danger of the return of New Polio in our midst. It also points out the close relationship between New Polio, Myalgic Encephalomyelitis (M.E.) and CFS.
In his book, Dr. Hyde posits 3 important questions:
Is the USA, and specifically the CDC, purposely hiding the on-set of this New Polio, or is it the world's worst medical book-keepers?
When the CDC does refer to this disease, why does it detract from its true effects by refusing to use the word, 'paralysis' or Polio, in it's medical descriptive, "Acute Flaccid Myelitis (AFM)"? The WHO (World Health Organization in Geneva), does use the word "paralysis" in it's descriptive, namely, "Acute Flaccid Paralysis".
Why can't hospitals and medical facilities across the USA recover the causative enteroviruses while such countries as Ghana, Taiwan, South Korea and Vietnam can?
Dr. Hyde elaborates on the crucial issues, which affect statistics and delay the prevention of future cases of paralysis and death. He outlines the medical and historical events that have led to the resurgence of this New Polio, and offers a solution: prompt enterovirus (EV) testing and precise epidemiology, to stop the spread of this and other enteroviral-caused illnesses.
This easy to read book is written to appeal to the general public and the disabled with M.E. or the various CFS illnesses. This book is essential reading for doctors, health care providers, government health officials who appear to have little knowledge of the complexities of Polio or the fact that it is caused by some 25 different enteroviruses, not just the three in the Salk and Sabin immunizations.
Polio was generally considered "conquered" after the Salk-Sabin vaccinations of the mid-20th-century. This premature belief led to the shutting down of significant further research into Enteroviruses, which in turn led to the current inability to test and sub-type Enteroviruses at illness onset. This not only prevents identification of the disease in individuals, but delays the gathering of statistics needed to protect the general public.
Dr. Byron Hyde is a leading worldwide authority on Myalgic Encephalomyelitis (M.E.) caused by the same enteroviruses that causes Polio and the New Polio (Acute Flaccid Paralysis or Myelitis). For 35 years he has explored M.E. patients and uncovered multiple causes of CFS. He has known and worked with the majority of the great M.E. researchers who have lived since 1934. He has lectured around the world on M.E. and CFS, and is one of only two physicians invited to address the House of Parliament and the House of Lords' Committee on M.E. in London.