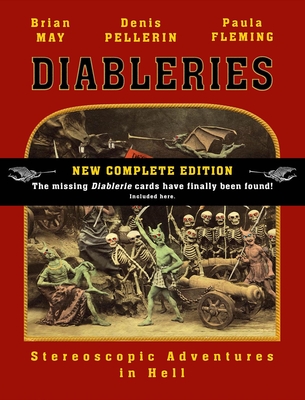 Revised to include every card in the rare series, this 3-D cult classic provides a unique satirical look at an 1860s view of Hell -- the French state under the tyrannical rule of Napoleon III.

Thanks to Dr. Brian May's imagination and his determination to share the wonders of these strange cards, thousands of readers have escaped the boundary of Earthly tedium Diableries transports them to a nightmarish netherworld inhabited by devils and skeletons in the nicest possible way, of course The amazing 3-D cards show scenes of torture, fire, and every variety of licentious behavior, with scantily clad ladies of the demi-monde and the devil himself encouraging the participants' worst intentions. After five years of searching, Dr. Brian May and his coauthors were able to find the one card, entitled La Cuve or The Barrel, missing from the initial publication of the book. These remarkable scenes were initially sculpted in clay, mostly by two leading French sculptors, Pierre Hennetier and Louis Habert, who daringly satirized Napoleon and his cohorts at great personal risk. These extremely detailed scenes, that allegorically critiqued daily events in a France where news was censored, were created and then photographed with a stereo camera to be viewed with a stereoscope. Their unique construction causes the demons' eyes to glow when held to the light.

Brian May, founder, member, songwriter and guitarist with the rock band Queen, and co-creator of the internationally successful rock theatrical, We Will Rock You, is also a Doctor of Astrophysics, a leading campaigner for animal rights, and a lifelong 3-D photography enthusiast. Most recently, he has become a successful publisher, dedicated to sharing his vast collection of Victorian stereo photographs with the world through the books released by The London Stereoscopic Company (a fond recreation of the highly successful company of the same name founded in 1854). Brian currently tours with Queen for much of the year with Adam Lambert as lead vocalist, as well as composing, recording, and performing in collaboration with West End star Kerry Ellis, an original luminary of the cast of We Will Rock You. His many other recent projects include working on 3-D 360-degree virtual reality movies, and the movie, Bohemian Rhapsody, the award-winning biopic of Freddie Mercury. Brian lives in London with his wife, his partner for over thirty years, actress Anita Dobson. Denis Pellerin, dedicated photo historian, was a teacher for over 30 years and has been interested in photography since the age of ten. He was bitten by the stereo bug in the 1980s, has been fascinated by the Diableries for over 25 years, and has written several books and articles on 19th-century stereo photography for various magazines, institutions and museums. He graduated with an MA in Art History at the Sorbonne in 1999 and has since been specializing in French and British Victorian genre stereo views. Paula Richardson Fleming is a photographic historian with a special interest in stereo photography. She is the retired Photo Archivist of the Smithsonian Institution National Anthropological Archives, and a Fellow and former member of the Board of Directors of the National Stereoscopic Association. Her credits include publications on 19th-century photography, as well as the curation of many photographic exhibits.