The Peace Tree from Hiroshima: The Little Bonsai with a Big Story 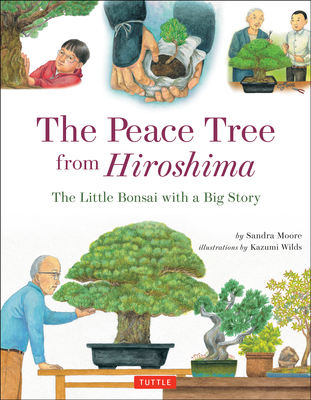 The Peace Tree from Hiroshima: The Little Bonsai with a Big Story

By  Sandra Moore , Illustrated By  Kazumi Wilds
$ 14.95
Out of Stock In Store (Available to Order)

This true children's story is told by a little bonsai tree, called Miyajima, that lived with the same family in the Japanese city of Hiroshima for more than 300 years before being donated to the National Arboretum in Washington DC in 1976 as a gesture of friendship between America and Japan to celebrate the American Bicentennial. From the Book:
In 1625, when Japan was a land of samurai and castles, I was a tiny pine seedling. A man called Itaro Yamaki picked me from the forest where I grew and took me home with him. For more than three hundred years, generations of the Yamaki family trimmed and pruned me into a beautiful bonsai tree. In 1945, our household survived the atomic bombing of Hiroshima. In 1976, I was donated to the National Arboretum in Washington D.C., where I still live today--the oldest and perhaps the wisest tree in the bonsai museum.

Sandra Moore began her writing career as a ghostwriter for a senator on Capitol Hill and has worked as a freelance journalist specializing in writing about children and families. She studied writing for children at the Washington Writers' Center. This is her first book. Kazumi Wilds illustrated Tuttle's All About Japan (Tuttle, 2011) and has illustrated several other children's books, including The Wakame Gatherers (Shen's Books, 2007). She lives in Japan but is currently studying in the United States. See her work at wildskazumi-picturebook.jimdo.com