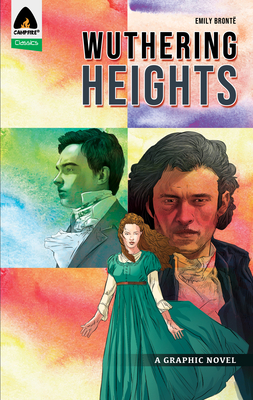 This graphic novel adaptation is a faithful rendering of one of nineteenth century English literature's most memorable classics.

A concise, highly enjoyable adaptation of the classic novel; one of more than 85 titles Campfire has published since their introduction to North America in 2010.

Mr Earnshaw brings home an abandoned orphan from a trip to Liverpool and sets in motion a chain of events that mine the depths of human emotions in the picturesque setting of the English moors.
A macabre love story that is both cruel and romantic, Emily Brontë 's Wuthering Heights is filled with beauty and has also amazed and horrified readers at the same time.

Author Bio:
Emily Brontë (30 July 1818 – 19 December 1848) was one of the celebrated Brontë sisters, the others being Charlotte and Anne, whose literary works are considered to be classics of English literature. As women authors were not taken seriously in their time, they published their works under male pseudonyms. Emily chose the name Ellis Bell. She was born in the village of Thornton in Yorkshire, England to Maria Branwell and Patrick Brontë. Her family later moved to Haworth, and Emily was to suffer the loss of her mother and two elder sisters Maria and Elizabeth to illness. The remaining sisters and their brother Branwell were schooled at home and were exposed to a wide variety of literature that was to influence them for the rest of their lives.

Wuthering Heights is Emily Brontë’s only novel and is considered a classic in English literature. When it was first published in 1847, readers thought it was written by a man and were shocked by its depiction of wild passion and obsession. Emily Brontë died a year later at the age of 30 from tuberculosis.

Adaptor Bio:
Ellis McCarthy has studied literature and creative writing at the University of Manchester. He has had a number of short stories published in print and online literary magazines, including 3AM, Smokelong, Monkeybicycle, and New Writer.  He is currently working on a magical realism novel.

A resident of New Delhi, India, Naresh Kumar describes himself as a seeker who is continuously trying to learn as much as he can, and his art is an expression of his curiosity toward the world. A firm believer in humanity, Naresh brings an experienced hand to the drawing board, and his photo-realistic style captures the subtle emotions of his characters. His work features in a number of titles from Campfire, which include World War Two: Against the Rising Sun, Julius Caesar, Martin Luther King Jr.: Let Freedom Ring, They Changed the World, The Industrial Revolution and Hamlet.