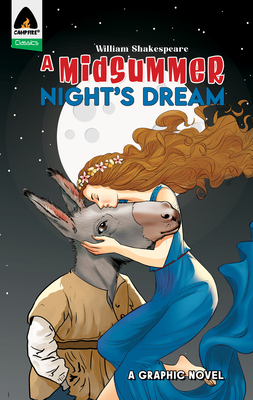 By  William Shakespeare , Adapted by  Wall Svanhild , Illustrated By  Naresh Kumar
$ 14.99
Out of Stock In Store

This graphic novel adaptation of Shakespeare's famous comedy retains the original language while the charming illustrations make the text more accessible for readers being introduced to the great dramatist's works for the first time.

A concise, highly enjoyable adaptation of the classic play; one of more than 85 titles Campfire has published since their introduction to North America in 2010.


At the dawn of Western civilization in ancient Athens, a young lady named Hermia has threatened to upset the order of things by announcing that she will marry the man she loves, rather than the man that her father has chosen for her. Theseus, Duke of Athens, asks, “How shall we find the concord of this discord?”

Join Shakespeare as he offers us a classically entertaining solution to this problem. Under pain of death, Hermia flees Athens and spends a mad Midsummer night along with her friends along with other city-dwellers in a nearby forest. Unbeknownst to the Athenians, the forest is inhabited by a legion of fairies and the mischievous hobgoblin Puck. The fairies’ misguided attempt to help out the humans with a magical herb leads to mayhem. As the buffoon Bottom says, the night in the forest becomes “a dream, past the wit of man to say what dream it was”.

Author Bio:
Famously known as ‘The Bard of Avon’, William Shakespeare was born in Stratford-upon-Avon. A rare playwright, he excelled in tragedies, comedies, and histories. Translated into innumerable languages across the globe, Shakespeare’s plays and sonnets are undoubtedly the most studied writings in the English language. Skillfully combining entertainment with unmatched poetry, some of his most famous plays are Othello, Macbeth, A Midsummer Night’s Dream, Romeo and Juliet, and The Merchant of Venice, among many others.

The characters he created and the stories he told have held the interest of people for the past 400 years! Till date, his plays are performed all over the world and have been turned into movies, comics, cartoons, operas, and musicals. A Midsummer Night's Dream is one of his most popular comedies, and one that features supernatural elements such as fairies, shape shifting and other forms of magic.

Adaptor Bio:
Svanhild Wall is a nom de plume for Malini Roy. She has previously adapted Shakespeare’s Hamlet for Campfire and has written essays on graphic novels for scholarly edited collections. Currently, she lives in the UK, where she is working on a volume of personal essays seconding a greater emphasis upon the arts and humanities in school education in India. These essays will be based partly upon her own research on archived collections of 18th and 19th -century English books for children and young people, and experience of having worked in rural school education in West Bengal, India.

A resident of New Delhi, India, Naresh Kumar describes himself as a seeker who is continuously trying to learn as much as he can, and his art is an expression of his curiosity toward the world. A firm believer in humanity, Naresh brings an experienced hand to the drawing board, and his photo-realistic style captures the subtle emotions of his characters. His work features in a number of titles from Campfire, which include World War Two: Against the Rising Sun, Julius Caesar, Martin Luther King Jr.: Let Freedom Ring, They Changed the World, The Industrial Revolution and Hamlet.