Arab Spring in Egypt: Revolution and Beyond 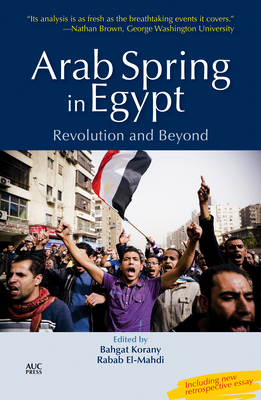 Arab Spring in Egypt: Revolution and Beyond

Beginning in Tunisia, and spreading to as many as seventeen Arab countries, the street protests of the 'Arab Spring' in 2011 empowered citizens and banished their fear of speaking out against governments. The Arab Spring belied Arab exceptionalism, widely assumed to be the natural state of stagnation in the Arab world amid global change and progress. The collapse in February 2011 of the regime in the region's most populous country, Egypt, led to key questions of why, how, and with what consequences did this occur? Inspired by the "contentious politics" school and Social Movement Theory, Arab Spring in Egypt addresses these issues, examining the reasons behind the collapse of Egypt's authoritarian regime; analyzing the group dynamics in Tahrir Square of various factions: labor, youth, Islamists, and women; describing economic and external issues and comparing Egypt's transition with that of Indonesia; and reflecting on the challenges of transition. "Its analysis is as fresh as the breathtaking events it covers."--Nathan Brown, George Washington University "Arab Spring in Egypt is a modern history study that brings much greater understanding to light about the views of modern Arab people and the future they see for their country."--Midwest Book Review.

Bahgat Korany is professor of international relations and political economy at the American University in Cairo, and director of the AUC Forum. He is the co-editor of The Foreign Policies of Arab States (AUC Press, 2008) and editor of The Changing Middle East: A New Look at Regional Dynamics (AUCPress, 2010). Rabab El-Mahdi is a visiting assistant professor in the Department of Political Science at the American University in Cairo, and the co-editor of Egypt Moment of Change (AUC Press, 2009).