Hawkeye: The Enthralling Autobiography of the Top-Scoring Israel Air Force Ace of Aces 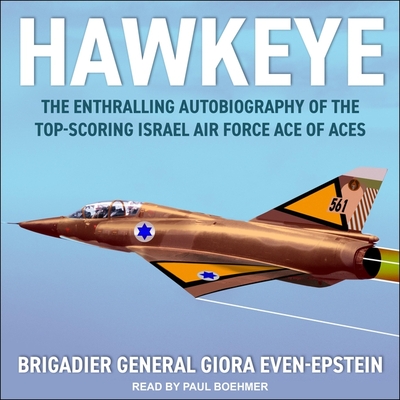 Hawkeye: The Enthralling Autobiography of the Top-Scoring Israel Air Force Ace of Aces

For more than thirty years, Giora Even-Epstein flew fighters for the Israel Air Force, achieving recognition as a highly skilled military aviator and the highest-scoring jet-mounted ace with the most num-ber of confirmed victories in the French Mirage. Having overcome numerous hurdles just to learn how to fly, he went on to compile a record of Arab MiGs and Sukhoi kills that bettered any other combat aviators' tally in the entire world. This fast-moving autobiography details his experiences particularly in the intense conflicts of 1967, the Six Day War, and 1973, the Yom Kippur War. The listener shares the cockpit with him as he describes every action he undertook with 101 and 105 Squadron, including the greatest jet-versus-jet air battle in history with four MiG-21 kills in one engagement. His final score was seventeen. After his last battle he became commander of the First Jet Squadron, 117, began civilian flying, retrained to command 254 MMR Squadron in the 1982 Lebanon War, and flew the F-16 at the age of fifty before retirement. His story is of one man's unfaltering dedication to his dreams and his country. As the leading jet ace it is one well worth telling and, critically, it can be told in his own words.