Review of Battle of Brothers: The Untold Story of Prince William and Harry's Royal Feud 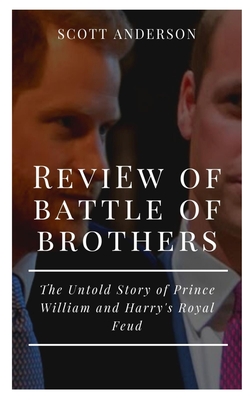 Review of Battle of Brothers: The Untold Story of Prince William and Harry's Royal Feud

"Battle of Brothers: William and Harry: the inside story of a family in tumult'', chronicles the ups and downs of the Prince William and Harry's relationship, which the author says is presently at Rock bottom.For about two years the royal sibling's relationship has been strained and both were unwilling to speak on their grievances. According to Royal Historian Robert, the inception of the feud began brewing when Prince William voiced concerns that Prince Harry and Meghan's dating was moving too quick as opposed to Prince William who courted Kate for about nine years before proposing to her, Harry wasn't too pleased with what his brother said and he went ahead with the wedding arrangements.For William it was the future condition of his monarchy which his whole life revolved around, while for Harry it was the adoration for the mind boggling and enthralling lady who had at last sorted out his life." His wife Meghan had her fair share of bias treatment especially from the media, given that she wasn't a royal neither did she share same race with the royal family. Could this feud be the reason Prince Harry decided to move out from the royal family? Find out more of this controversial royal romance and what really led to the family feud by Clicking on Buy Now.