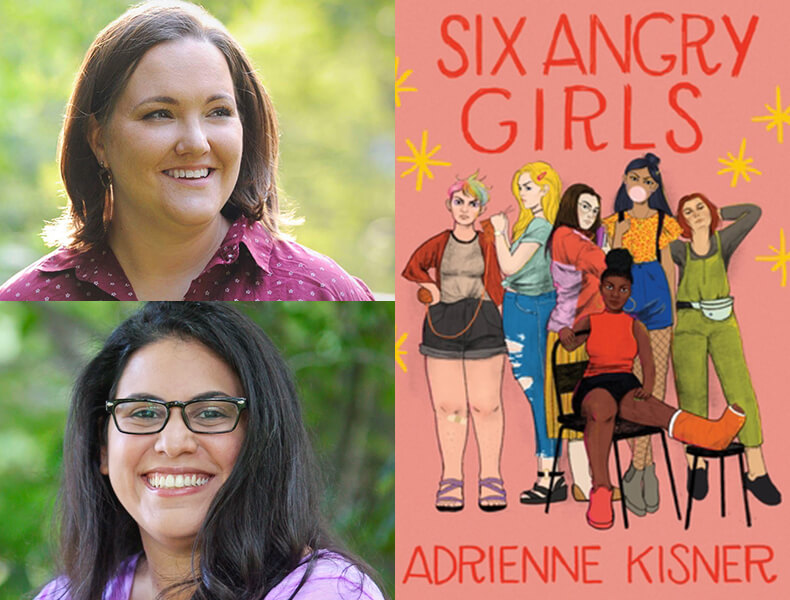 Adrienne Kisner's Six Angry Girls is a story of mock trial, feminism, and the inherent power found in a pair of knitting needles.

Raina Petree is crushing her senior year, until her boyfriend dumps her, the drama club (basically) dumps her, the college of her dreams slips away, and her arch-nemesis triumphs. Things aren’t much better for Millie Goodwin. Her father treats her like a servant, and the all-boy Mock Trial team votes her out, even after she spent the last three years helping to build its success.

But then, an advice columnist unexpectedly helps Raina find new purpose in a pair of knitting needles and a politically active local yarn store. This leads to an unlikely meeting in the girls’ bathroom, where Raina inspires Millie to start a rival team. The two join together and recruit four other angry girls to not only take on Mock Trial, but to smash the patriarchy in the process.

Adrienne Kisner has master's and doctorate degrees in theology from Boston University, and was inspired by her work with high school and college students to write Dear Rachel Maddow. She is a graduate of Vermont College of Fine Arts with an MFA in writing for children and young adults. She is also the author of The Confusion of Laurel Graham.

Sara Farizan is the critically acclaimed and award winning author of young adult novels Here to Stay, Tell Me Again How a Crush Should Feel, and If You Could Be Mine. She also has short stories in the anthologies Fresh Ink, All Out, The Radical Element, Hungry Hearts, and all of these titles can be ordered from one of Sara's favorite indies, The Brookline Booksmith.

Check out Sara's books in our online shop!