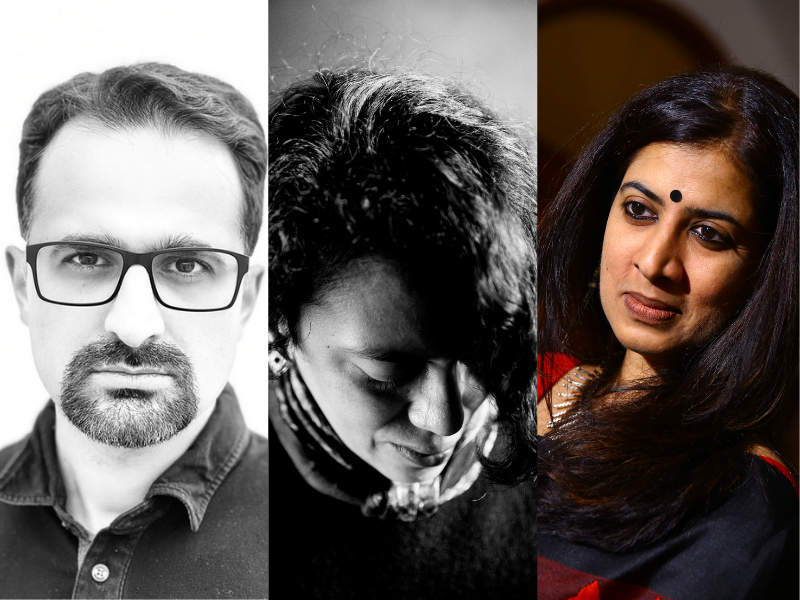 Join us for an afternoon of poetry with Amit Majmudar, Karthika Naïr, and Arundhathi Subramaniam. They'll be in conversation with scholar Laetitia Zecchini.

Amit Majmudar is a novelist, poet, translator, essayist, and diagnostic nuclear radiologist. He is the author of four volumes of poetry, most recently What He Did in Solitary. His first collection was a finalist for the Poetry Society of America’s Norma Farber First Book Award; his second was selected for the 2011 Donald Justice Prize, and he served as Ohio's first Poet Laureate. His work has appeared in The New York Times, The New Yorker, Best of the Best American Poetry, and many other places, including the eleventh edition of The Norton Introduction to Literature. He is also the author of Godsong: A Verse Translation of the Bhagavad-Gita, with Commentary.

With his dazzling ability to set words spinning, Amit Majmudar brings us poems that sharpen both wit and knives in What He Did in Solitary. Equally engaged with human history and the human heart, Majmudar transfigures identity from a locus of captivity to the open field of his liberation. He is unafraid to face human failings: from Oxycontin addiction to Gujarat rioting, he examines the fragility of the soul, the unchartability of pain, and the reasons we sing and grieve and make war. All-American and multitudinously alone, dancing in his confinement, Majmudar is a poet of exuberance and transcendence.

Karthika Naïr is the author of several books, including the award-winning Until the Lions: Echoes from the Mahabharata, and principal scriptwriter of Akram Khan's DESH, Chotto Desh and Until the Lions, a partial adaptation of her own book. Also a dance enabler, Naïr's closest association has been with Sidi Larbi Cherkaoui and Damien Jalet as executive producer of their works like Babel (Words), Puz/zle and Les Médusés, and as co-founder of Cherkaoui’s company, Eastman.

In Until the Lions, Karthika Naïr refracts the epic Mahabharata through the voices of nameless soldiers, outcast warriors and handmaidens as well as abducted princesses, tribal queens, and a gender-shifting god. As peripheral figures and silent catalysts take center stage, we get a glimpse of lives and stories buried beneath the dramas of god and nation, heroics and victory—of the lives obscured by myth and history, all too often interchangeable. Until the Lions is a kaleidoscopic, poetic tour de force. It reveals the most intimate threads of desire, greed, and sacrifice in this foundational epic.

Arundhathi Subramaniam is the award-winning author of twelve books of poetry and prose and has been described as "one of the finest poets writing in India today." She is the recipient of various awards and fellowships, including the inaugural Khushwant Singh Prize, the Raza Award for Poetry, and the International Piero Bigongiari Prize, among others. She has written extensively on culture and spirituality, and has worked over the years as poetry editor, cultural curator and critic. She is also the author of Sadhguru: More Than a Life and The Book of Buddha and editor of Pilgrim's India: An Anthology and Eating God: A Book of Bhakti Poetry.

The poems of Love Without a Story celebrate an expanding kinship: of passion and friendship, mythic quest and modern-day longing, in a world animated by dialogue and dissent, delirium and silence. Circling themes of intimacy and time, they return to the urgency of conversation: that fragile bridge across the frozen attitudes that divide our world. But at the heart of the collection is a deeper preoccupation with those blurry places where humans might walk with gods, where the body might touch the beyond, where the enchanted might intersect effortlessly with the everyday. Where one stumbles upon what the poet simply calls ‘love without a story’.

Moderator Laetitia Zecchini is a research fellow at the CNRS in Paris, currently visiting scholar at Boston University. She is the author of a monograph on the poet Arun Kolatkar whom she has also translated into French, and writes on contemporary Indian poetry, modernism, and the politics of literature. She is currently working on a book around issues of cultural / literary freedom and the poetics and politics of modernism in Cold War India and is part of the project writers and free expression.