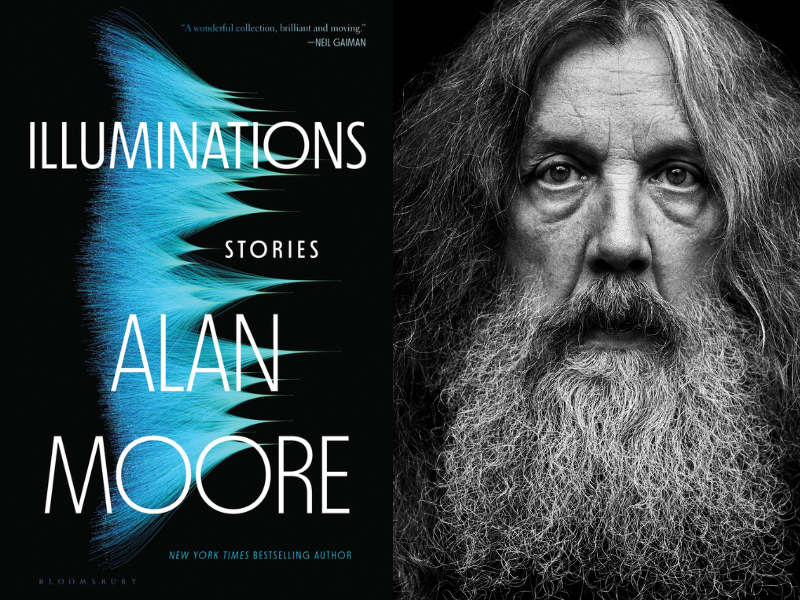 Celebrate the release of Illuminations, the first-ever short story collection by legendary comics writer Alan Moore. The author will be in conversation with Matt Bell.

This event is presented in partnership with the Wisconsin Book Festival, and will be held on their Crowdcast.

From New York Times bestselling author Alan Moore-one of the most influential writers in the history of comics-"a wonderful collection, brilliant and often moving" (Neil Gaiman) which takes us to the fantastical underside of reality.

In his first-ever short story collection, which spans forty years of work, Alan Moore presents a series of wildly different and equally unforgettable characters who discover--and in some cases even make and unmake--the various uncharted parts of existence.

In "A Hypothetical Lizard," two concubines in a brothel of fantastical specialists fall in love with tragic ramifications. In "Not Even Legend," a paranormal study group is infiltrated by one of the otherworldly beings they seek to investigate. In "Illuminations," a nostalgic older man decides to visit a seaside resort from his youth and finds the past all too close at hand. And in the monumental novella "What We Can Know About Thunderman," which charts the surreal and Kafkaesque history of the comics industry's major players over the last seventy-five years, Moore reveals the dark, beating heart of the superhero business.

From ghosts and otherworldly creatures to theoretical Boltzmann brains fashioning the universe at the big bang, Illuminations is exactly that--a series of bright, startling tales from a contemporary legend that reveal the full power of imagination and magic.

Alan Moore is an English writer widely regarded as the best and most influential writer in the history of comics. His seminal works include From Hell and The League of Extraordinary Gentlemen. He is also the author of the bestselling Jerusalem. He was born in Northampton, and has lived there ever since.