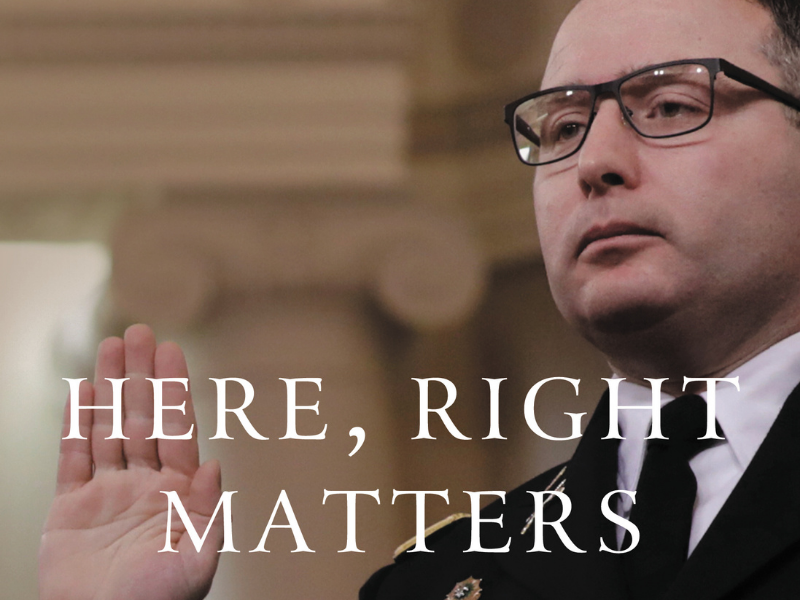 Copies of the book purchased on the registration page include a signed bookplate.

Retired U.S. Army Lieutenant Colonel Alexander Vindman, who found himself at the center of a firestorm for his decision to report the infamous phone call that led to presidential impeachment, tells his own story for the first time. Here, Right Matters is a stirring account of Vindman's childhood as an immigrant growing up in New York City, his career in service of his new home on the battlefield and at the White House, and the decisions leading up to, and fallout surrounding, his exposure of President Trump's abuse of power.

Lieutenant Colonel Alexander S. Vindman (Retired) was most recently the director for Eastern Europe, the Caucasus, and Russia on the White House’s National Security Council. Prior to retiring from the U.S. Army, he served as a Foreign Area Officer with assignments in Moscow, Russia and for the Chairman of the Joint Chiefs of Staff as a Political-Military Affairs Officer. While on the Joint Staff, he co-authored the National Military Strategy Russia Annex and was the principal author for the Global Campaign for Russia. He is currently a doctoral student at the Johns Hopkins School of Advanced International Studies and a Visiting Fellow at Perry World House.