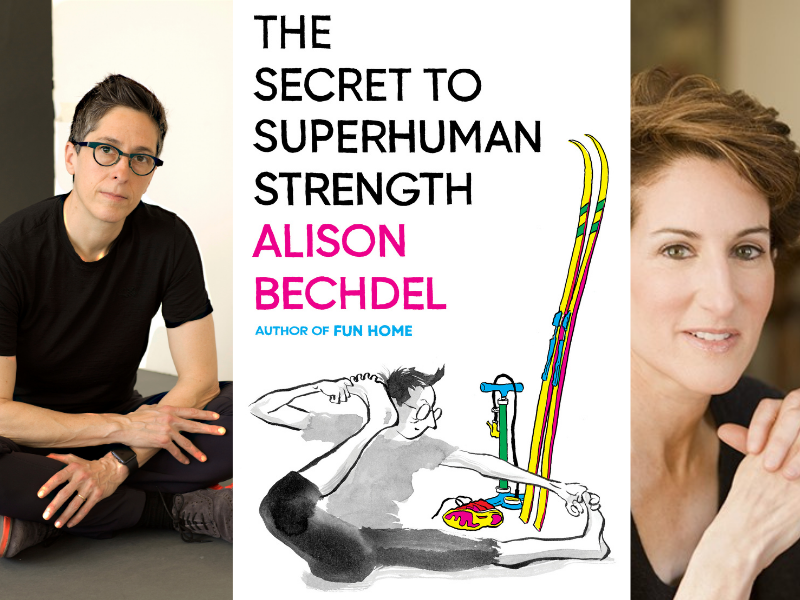 Brookline Booksmith and the Wilbur Theatre present The Secret to Superhuman Strength: A Conversation with Alison Bechdel!

Tickets include event entrance and a copy of The Secret to Superhuman Strength shipped to the United States address of your choice. The first 200 copies sold through the registration page will be signed by the author--see ticket information at the registration link for details and availability.

Fun Home author and MacArthur Genius Award winner Alison Bechdel and Pulitzer Prize winner Stacy Schiff will appear in conversation about Bechdel’s new book, The Secret to Superhuman Strength. Bechdel’s quest for this elusive secret leads her not just through a succession of fitness fads and exercise exploits, but into the more immaterial realms of creativity, loss, desire, addictive behavior, mortality, the problem of the self, and, for good measure, the nature of the universe. On her circuitous path, she enlists the aid of literary figures from the Transcendentalists and the British Romantics to Jack Kerouac. This deeply-layered graphic memoir charts one person’s lifelong effort, as diverting as it is dogged, to get the mind and body on the same page.

Alison Bechdel’s cult following for her comic strip Dykes to Watch Out For expanded wildly for her best-selling memoirs, Fun Home, adapted into a Tony Award-winning musical, and Are You My Mother? Her many honors include being named a MacArthur Fellow and Cartoonist Laureate of Vermont.

Moderator Stacy Schiff is the author, most recently, of Cleopatra and The Witches: Salem, 1692, both #1 bestsellers.  Writing in the Wall Street Journal, Brad Gooch has called her “perhaps the most seductive writer of nonfiction prose in America in our time.”  A former Guggenheim Fellow, she was awarded a Pulitzer Prize for her Vera (Mrs. Vladimir Nabokov).