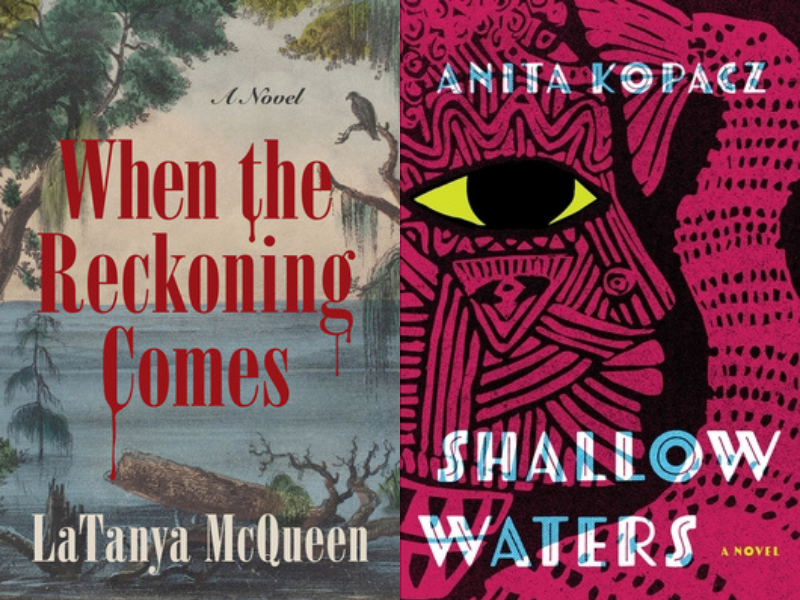 Join us for a conversation with authors Anita Kopacz (Shallow Waters) and LaTanya McQueen (When the Reckoning Comes) on Black authorship, genre defiance, and history.

Copies of When the Reckoning Comes purchased on the registration page will come with a signed bookplate.

In this stirring and lyrical debut novel—perfect for fans of The Water Dancer and the Legacy of Orïsha series—the Yoruba deity of the sea, Yemaya, is brought to vivid life as she discovers the power of Black resilience, love, and feminine strength in antebellum America.

We meet Yemaya as a young woman, still in the care of her mother and not yet fully aware of the spectacular power she possesses to protect herself and those she holds dear. On her journey, Yemaya confronts the greatest evils of this era; transcends time and place in search of Obatala, a man who sacrifices his own freedom for the chance at hers; and grows into the powerful woman she was destined to become. We travel alongside Yemaya from her native Africa and on to the “New World,” with vivid pictures of life for those left on the outskirts of power.

Anita Kopacz is an award-winning writer and spiritual advisor. She is the former Editor-in-Chief of Heart & Soul Magazine and Managing Editor of BeautyCents Magazine. When she is not writing, you can find her on the dance floor or traveling the world with her children. Anita lives in New York City with her family.

When the Reckoning Comes

More than a decade ago, Mira fled her small, segregated hometown in the south to forget. With every mile she traveled, she distanced herself from her past: from her best friend Celine, mocked by their town as the only white girl with black friends; from her old neighborhood; from the eerie Woodsman plantation rumored to be haunted by the spirits of slaves; from the terrifying memory of a ghost she saw that terrible day when a dare-gone-wrong almost got Jesse—the boy she secretly loved—arrested for murder.

But now Mira is back in Kipsen to attend Celine’s wedding at the plantation, which has been transformed into a lush vacation resort. For all its fancy renovations, the Woodsman remains a monument to its oppressive racist history. The bar serves antebellum drinks, entertainments include horrifying reenactments, and the service staff is nearly all black. Yet the darkest elements of the plantation’s past have been carefully erased—rumors that slaves were tortured mercilessly and that ghosts roam the lands, seeking vengeance on the descendants of those who tormented them, which includes most of the wedding guests.

As the weekend unfolds, Mira, Jesse, and Celine are forced to acknowledge their history together, and to save themselves from what is to come.

LaTanya McQueen has an MFA from Emerson College, a PhD from the University of Missouri, and was the Robert P. Dana Emerging Writer Fellow at Cornell College. She is an assistant professor of English and creative writing at Coe College in Iowa.