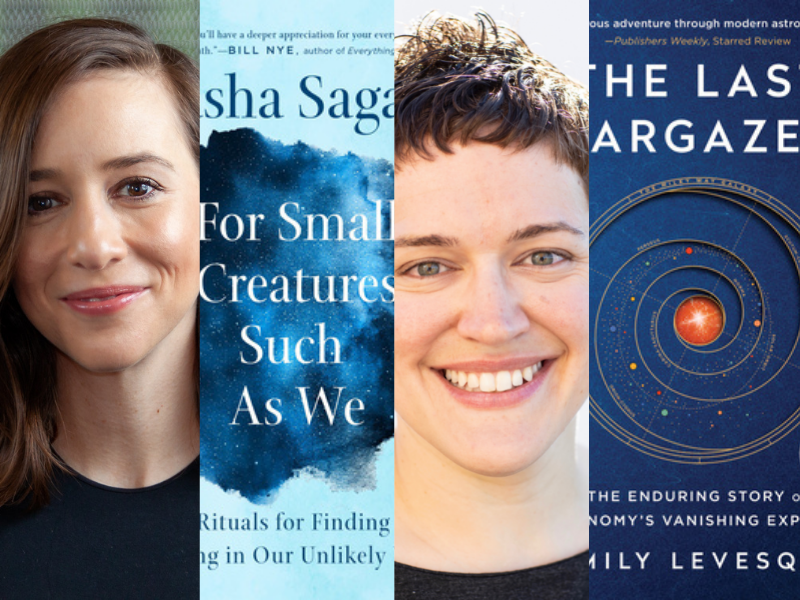 Join us for a conversation between Sasha Sagan (For Small Creatures Such as We) and Emily Levesque (The Last Stargazers) as they celebrate the paperback releases of their books.

Copies of For Small Creatures Such as We purchased on the registration page will be signed and personalized by the author.

The Last Stargazers: The Enduring Story of Astronomy's Vanishing Explorers

The story of the people who see beyond the stars—an astronomy book for adults still spellbound by the night sky.

Humans from the earliest civilizations through today have craned their necks each night, using the stars to orient themselves in the large, strange world around them. Stargazing is a pursuit that continues to fascinate us: from Copernicus to Carl Sagan, astronomers throughout history have spent their lives trying to answer the biggest questions in the universe. Now, award-winning astronomer Emily Levesque shares the stories of modern-day stargazers in this new nonfiction release, the people willing to adventure across high mountaintops and to some of the most remote corners of the planet, all in the name of science.

From the lonely quiet of midnight stargazing to tall tales of wild bears loose in the observatory, The Last Stargazers is a love letter to astronomy and an affirmation of the crucial role that humans can and must play in the future of scientific discovery.

In this sweeping work of narrative science, Levesque shows how astronomers in this scrappy and evolving field are going beyond the machines to infuse creativity and passion into the stars and space and inspires us all to peer skyward in pursuit of the universe's secrets.

Emily Levesque is an astronomy professor at the University of Washington studying how the most massive stars in the universe evolve and die. She has observed with many of the planet’s largest telescopes and flown over the Antarctic stratosphere in an experimental aircraft for her research. Her academic accolades include the 2014 Annie Jump Cannon Award and the 2020 Newton Lacy Pierce Prize from the American Astronomical Society.

For Small Creatures Such as We: Rituals for Finding Meaning in Our Unlikely World

Sasha Sagan was raised by secular parents, the astronomer Carl Sagan and the writer and producer Ann Druyan. They taught her that the natural world and vast cosmos are full of profound beauty, and that science reveals truths more wondrous than any myth or fable.

When Sagan herself became a mother, she began her own hunt for the natural phenomena behind our most treasured occasions--from births to deaths, holidays to weddings, anniversaries, and more--growing these roots into a new set of rituals for her young daughter that honor the joy and significance of each experience without relying on a religious framework.

As Sagan shares these rituals, For Small Creatures Such as We becomes a moving tribute to a father, a newborn daughter, a marriage, and the natural world--a celebration of life itself, and the power of our families and beliefs to bring us together.

Sasha Sagan holds a degree in dramatic literature from NYU. She has worked as a television producer, filmmaker, editor, and speaker in New York, Boston, and London, and her writing has appeared in The New York Magazine, O., the Oprah Magazine, Literary Hub, Mashable.com, The Violet Book, and elsewhere. For Small Creatures Such as We is her first book.