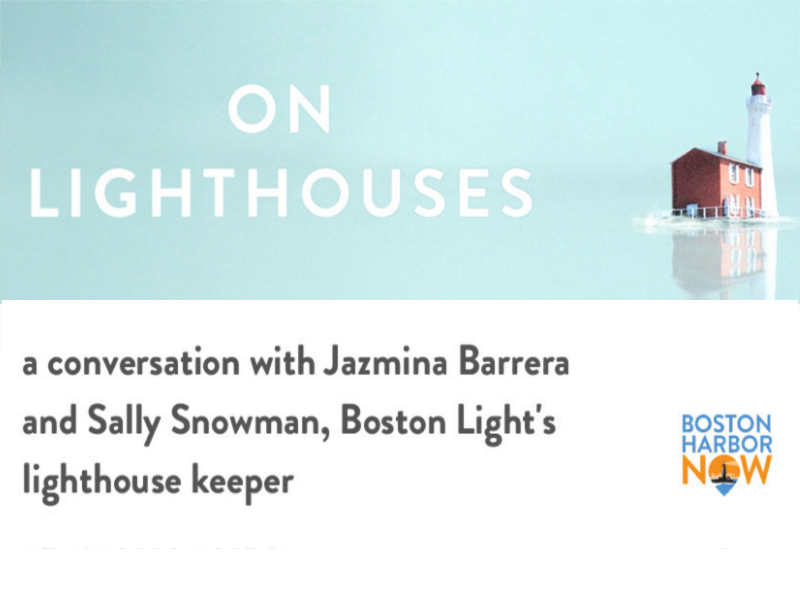 This Boston Harbor Now event is co-sponsored by Brookline Booksmith

Join Boston Harbor Now, Two Lines Press and Brookline Booksmith for an event with Jazmina Barrera and Boston Light's Keeper, Sally Snowman, in celebration of Barrera's new book On Lighthouses, out this past May from Two Lines Press!

Far from home, in the confines of a dim New York apartment where the oppressive skyscrapers further isolate her, Jazmina Barrera offers a tour of her lighthouses--those structures whose message is "first and foremost, that human beings are here."

Starting with Robert Louis Stevenson's grandfather, an engineer charged with illuminating the Scottish coastline, On Lighthouses artfully examines lighthouses from the Spanish to the Oregon coasts and those in the works of Virginia Woolf, Edgar Allan Poe, Ingmar Bergman, and many others.

In trying to "collect" lighthouses by obsessively describing them, Barrera begins to question the nature of writing, collecting, and how, by staring so intently at one thing we are only trying to avoid others. Equal parts personal memoir and literary history, On Lighthouses takes the reader on a desperate flight from raging sea to cold stone--from a hopeless isolation to a meaningful one--concluding at last in a place of peace: the home of a selfless, guiding light.

Jazmina Barrera was born in Mexico City. She won the Latin American Voices award in 2013. She studied the Master’s in Creative Writing in Spanish at NYU. She is co-editor at Ediciones Antilope and author of On Lighthouses, to be published by Two Lines in May 2020.

Sally Snowman is the Keeper of Boston Light, the nation’s oldest lighthouse station, 300 years old, out on Little Brewster Island. Sally is a Coast Guard Auxiliarist and the 70th keeper of Boston Light since 1716. She resides on the island with her husband, Jay Thomson.