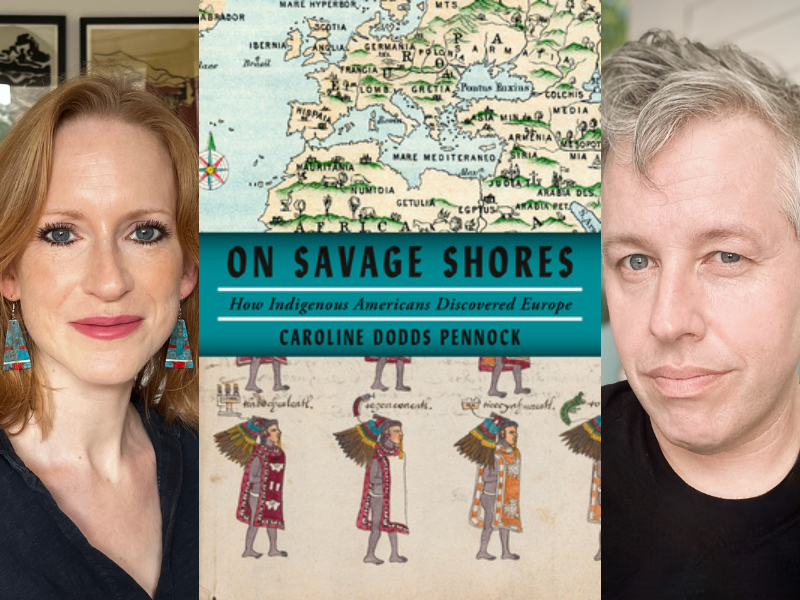 Celebrate the release of On Savage Shores: How Indigenous Americans Discovered Europe with author Caroline Dodds Pennock, in conversation with Andrew Lipman.

A landmark work of narrative history that shatters our previous Eurocentric understanding of the Age of Discovery by telling the story of the Indigenous Americans who journeyed across the Atlantic to Europe after 1492.

We have long been taught to presume that modern global history began when the "Old World" encountered the "New", when Christopher Columbus “discovered” America in 1492. But, as Caroline Dodds Pennock conclusively shows in this groundbreaking book, for tens of thousands of Aztecs, Maya, Totonacs, Inuit and others —enslaved people, diplomats, explorers, servants, traders—the reverse was true: they discovered Europe. For them, Europe comprised savage shores, a land of riches and marvels, yet perplexing for its brutal disparities of wealth and quality of life, and its baffling beliefs.

The story of these Indigenous Americans abroad is a story of abduction, loss, cultural appropriation, and, as they saw it, of apocalypse—a story that has largely been absent from our collective imagination of the times. From the Brazilian king who met Henry VIII to the Aztecs who mocked up human sacrifice at the court of Charles V; from the Inuk baby who was put on show in a London pub to the mestizo children of Spaniards who returned “home” with their fathers; from the Inuit who harpooned ducks on the Avon river to the many servants employed by Europeans of every rank: here are a people who were rendered exotic, demeaned, and marginalized, but whose worldviews and cultures had a profound impact on European civilization.

Drawing on their surviving literature and poetry and subtly layering European eyewitness accounts against the grain, Pennock gives us a sweeping account of the Indigenous American presence in, and impact on, early modern Europe.

Caroline Dodds Pennock is one of the world’s leading authorities on the Aztecs. Trained at Oxford, she is senior lecturer in international history at the University of Sheffield, and her study of Aztec human sacrifice, Bonds of Blood, won the Royal Historical Society’s Gladstone Prize in 2008.

Moderator Andrew Lipman is Associate Professor of History at Barnard College, Columbia University. His first book, The Saltwater Frontier: Indians and the Contest for the American Coast, won the 2016 Bancroft Prize in American History. He is presently completing a book about Tisquantum, the Wampanoag man better known as "Squanto," who is most famous for helping the Mayflower colonists survive their first year in America. Lipman also grew up in Brookline and is a proud graduate of Pierce elementary school and Brookline High.