Cassandra Khaw with Paul Tremblay: Nothing But Blackened Teeth

Cassandra Khaw with Paul Tremblay: Nothing But Blackened Teeth 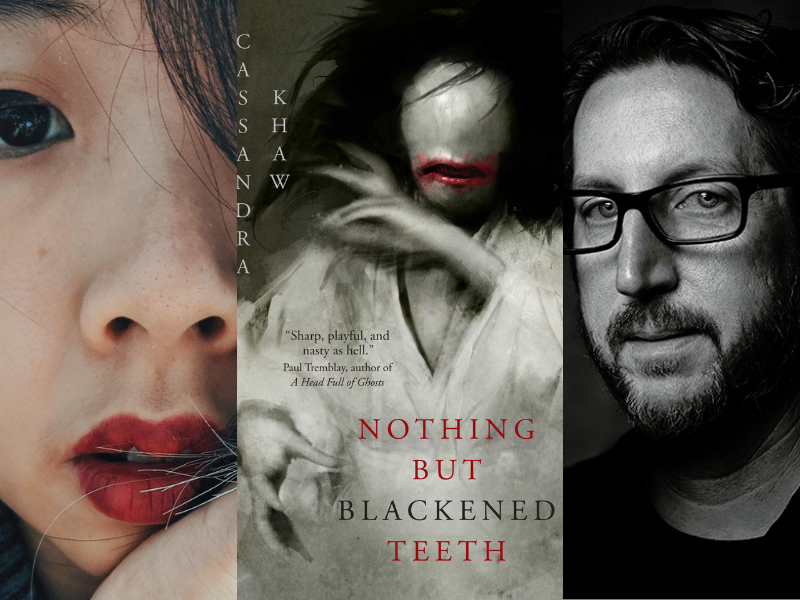 Celebrate the release of Nothing But Blackened Teeth with author Cassandra Khaw, in conversation with Paul Tremblay!

Nothing But Blackened Teeth

Cassandra Khaw's Nothing But Blackened Teeth is a gorgeously creepy haunted house tale, steeped in Japanese folklore and full of devastating twists. A Heian-era mansion stands abandoned, its foundations resting on the bones of a bride and its walls packed with the remains of the girls sacrificed to keep her company. It’s the perfect venue for a group of thrill-seeking friends, brought back together to celebrate a wedding.

A night of food, drinks, and games quickly spirals into a nightmare as secrets get dragged out and relationships are tested. But the house has secrets too. Lurking in the shadows is the ghost bride with a black smile and a hungry heart. And she gets lonely down there in the dirt.

Effortlessly turning the classic haunted house story on its head, Nothing but Blackened Teeth is a sharp and devastating exploration of grief, the parasitic nature of relationships, and the consequences of our actions

Cassandra Khaw is an award-winning game writer, award-nominated author, and former scriptwriter for Ubisoft Montreal. Their work can be found in places like The Magazine of Fantasy & Science Fiction, Lightspeed, and Tor.com. Khaw's first original novella, Hammers on Bone, was a British Fantasy Award and Locus Award finalist. Acclaimed writer Khaw can also talk about anything from punk rock, to mythologies from all over the world, to Lovecraftian horror. Khaw's horror novella Nothing But Blackened Teeth is all about Japanese ghosts and demons and is set to release in October 2021. Their forthcoming novel with Richard Kadrey, The Dead Take the A Train, is set to publish by Nightfire in Summer 2022. They can be found at http://www.cassandrakhaw.net

Paul Tremblay has won the Bram Stoker, British Fantasy, and Massachusetts Book awards and is the author of Survivor Song, The Cabin at the End of the World, Disappearance at Devil’s Rock, A Head Full of Ghosts, the crime novels The Little Sleep and No Sleep Till Wonderland, and the short story collection, Growing Things and Other Stories. His essays and short fiction have appeared in the Los Angeles Times, New York Times, Entertainment Weekly online, and numerous year’s-best anthologies. He has a master’s degree in mathematics and lives outside Boston with his family.