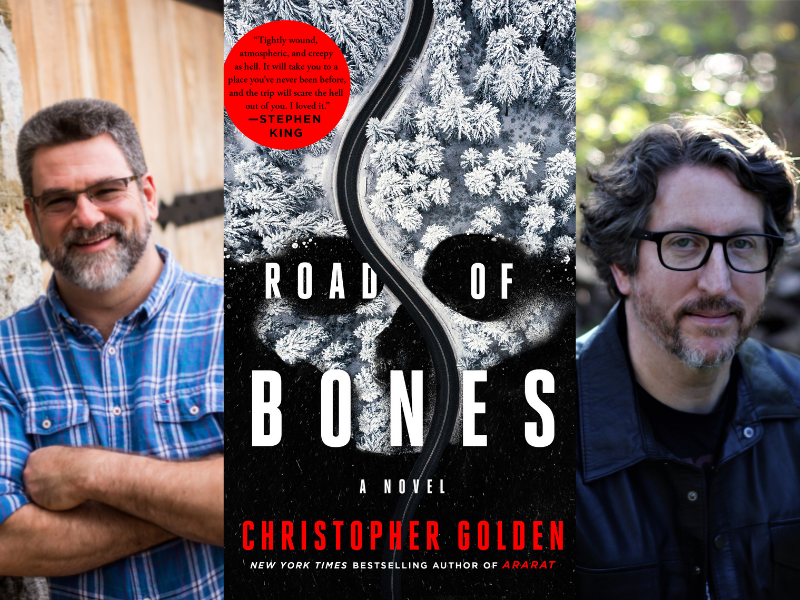 Celebrate the release of Road of Bones with author Christopher Golden, in conversation with Paul Tremblay!

Books purchased on the registration page will be signed and personalized by the author.

Surrounded by barren trees in a snow-covered wilderness with a dim, dusky sky forever overhead, Siberia’s Kolyma Highway is 1200 miles of gravel packed permafrost within driving distance of the Arctic Circle. A narrow path where drivers face such challenging conditions as icy surfaces, limited visibility, and an average temperature of sixty degrees below zero, fatal car accidents are common.

But motorists are not the only victims of the highway. Known as the Road of Bones, it is a massive graveyard for the former Soviet Union’s gulag prisoners. Hundreds of thousands of people worked to death and left where their bodies fell, consumed by the frozen elements and plowed beneath the permafrost road.

Fascinated by the history, documentary producer Felix “Teig” Teigland is in Russia to drive the highway, envisioning a new series capturing Life and Death on the Road of Bones with a ride to the town of Akhust, “the coldest place on Earth”, collecting ghost stories and local legends along the way. Only, when Teig and his team reach their destination, they find an abandoned town, save one catatonic nine-year-old girl—and a pack of predatory wolves, faster and smarter than any wild animals should be.

Pursued by the otherworldly beasts, Teig’s companions confront even more uncanny and inexplicable phenomena along the Road of Bones, as if the ghosts of Stalin’s victims were haunting them. It is a harrowing journey that will push Teig beyond endurance and force him to confront the sins of his past.

Christopher Golden is the New York Times bestselling and Bram Stoker award-winning author of Ararat, Snowblind, Dead Ringers, and Of Saints and Shadows, among many other novels. With Mike Mignola, he is the co-creator of two cult favorite comic book series, Baltimore and Joe Golem: Occult Detective. Golden is also the editor of such anthologies as Seize the Night, The New Dead, and Dark Cities, and the co-host of the popular podcast "Three Guys with Beards." He lives in Massachusetts.

Moderator Paul Tremblay has won the Bram Stoker, British Fantasy, and Massachusetts Book awards and is the author of Survivor Song, The Cabin at the End of the World, A Head Full of Ghosts, the forthcoming The Pallbearers Club, and the crime novels The Little Sleep and No Sleep Till Wonderland, and the short story collection Growing Things and Other Stories. His essays and short fiction have appeared in the Los Angeles Times, New York Times, Entertainment Weekly online, and numerous year’s-best anthologies. He has a master’s degree in mathematics and lives outside Boston with his family.