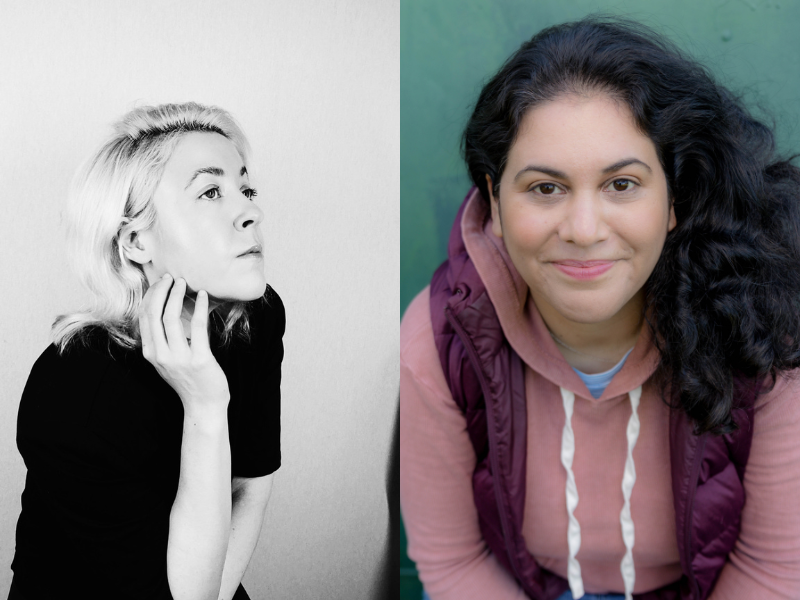 Join us for a conversation with Courtney Summers (I'm the Girl) and Sara Farizan (Dead Flip).

Copies of Dead Flip purchased on the registration page will be signed & personalized by the author! Copies of I'm the Girl will include a signed bookplates and a special indies-only pink art print (see below for details).

All sixteen-year-old Georgia Avis wants is everything, but the poverty and hardship that defines her life has kept her from the beautiful and special things she knows she deserves. When she stumbles upon the dead body of thirteen-year-old Ashley James, Georgia teams up with Ashley's older sister Nora, to find the killer before he strikes again, and their investigation throws Georgia into a glittering world of unimaginable privilege and wealth--and all she's ever dreamed. But behind every dream lurks a nightmare, and Georgia must reconcile her heart's desires with what it really takes to survive. As Ashley's killer closes in and their feelings for one another grow, Georgia and Nora will discover when money, power, and beauty rule, it's not always a matter of who is guilty but who is guiltiest--and the only thing that might save them is each other.

A spiritual successor to the breakout hit Sadie, I’m the Girl is a brutal and illuminating account of how one young woman feels in her body as she struggles to navigate a deadly and predatory power structure while asking readers one question: if this is the way the world is, do you accept it?

Courtney Summers is the bestselling and critically acclaimed author of several novels for young adults, including Cracked Up to Be, All the Rage, and Sadie. Her work has been released to multiple starred reviews, received numerous awards and honors--including the Edgar Award and Odyssey Award--and has been recognized by many library, 'Best Of' and Readers' Choice lists. She lives and writes in Canada.

Growing up, Cori, Maz, and Sam were inseparable best friends, sharing their love for Halloween, arcade games, and one another. Now it’s 1992, Sam has been missing for five years, and Cori and Maz aren’t speaking anymore. How could they be, when Cori is sure Sam is dead and Maz thinks he may have been kidnapped by a supernatural pinball machine?

These days, all Maz wants to do is party, buy CDs at Sam Goody, and run away from his past. Meanwhile, Cori is a homecoming queen, hiding her abiding love of horror movies and her queer self under the bubblegum veneer of a high school queen bee. But when Sam returns—still twelve years old while his best friends are now seventeen—Maz and Cori are thrown back together to solve the mystery of what really happened to Sam the night he went missing. Beneath the surface of that mystery lurk secrets the friends never told one another, then and now. And Sam’s is the darkest of all . . .

Award-winning author of If You Could Be Mine and Here to Stay Sara Farizan delivers edge-of-your-seat terror as well as her trademark referential humor, witty narration, and insightful characters.

Sara Farizan (she/her) is the award-winning and critically acclaimed author of books and stories for young people. Her young adult novels with Algonquin Young Readers are Here to Stay, Tell Me Again How a Crush Should Feel, and the Lambda Literary award winning If You Could Be Mine, which was named one of TIME magazine’s 100 Best YA Books of All Time. Her latest novel, Dead Flip, is a horror comedy set in the 90s about a childhood friend who comes back from disappearing in the 80s and is still twelve while his estranged best friends are seniors in high school. Booklist's starred review of Dead Flip described it as "A well-crafted homage to narratives like It and Stranger Things...A great choice for horror stalwart fans and newcomers to the genre." She also had a dream come true in writing a middle grade graphic novel for DC comics, My Buddy Killer Croc, illustrated by Nicoletta Baldari, featuring many of Farizan's favorite characters from Gotham City.