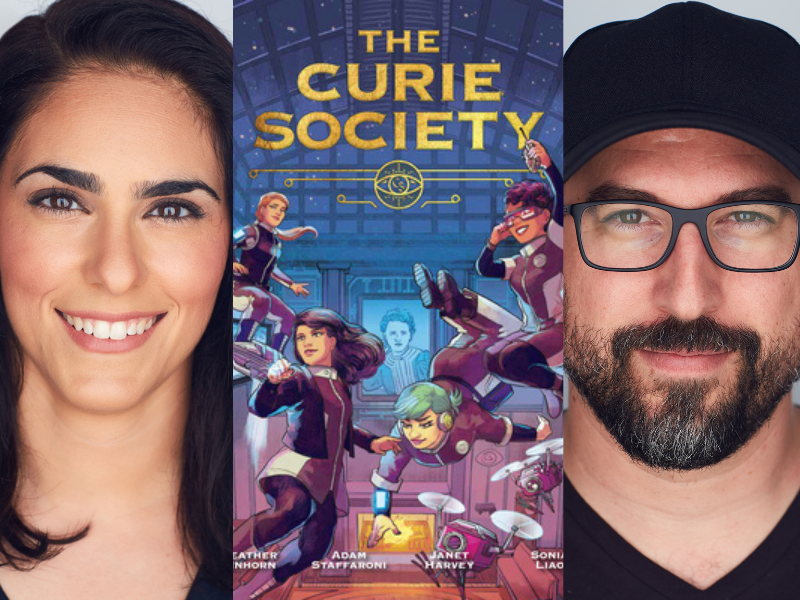 Celebrate the release of The Curie Society with the authors and Ryan North. Books bought through the registration page will come with a signed bookplate and a Curie Society pin!

An action-adventure original graphic novel, The Curie Society follows a team of young women recruited by an elite secret society--originally founded by Marie Curie--with the mission of supporting the most brilliant female scientists in the world. The heroines of the Curie Society use their smarts, gumption, and cutting-edge technology to protect the world from rogue scientists with nefarious plans. Readers will follow recruits Simone, Taj, and Maya as they decipher secret codes, clone extinct animals, develop autonomous robots, and go on high-stakes missions.

Moderator Ryan North is the New York Times-bestselling and Eisner-winning writer whose recent work includes the non-fiction How To Invent Everything: A Survival Guide for the Stranded Time Traveller, the semi-fictional graphic novel adaptation of Kurt Vonnegut's Slaughterhouse-Five, and the so-far-fictional Unbeatable Squirrel Girl series for Marvel. He's also twice collaborated with William Shakespeare on choose-your-own-path versions of his plays. He lives in Toronto, where he writes for video games, television, and his long-running webcomic Dinosaur Comics, and he once messed up walking his dog so badly it made the news. (We remember this.)