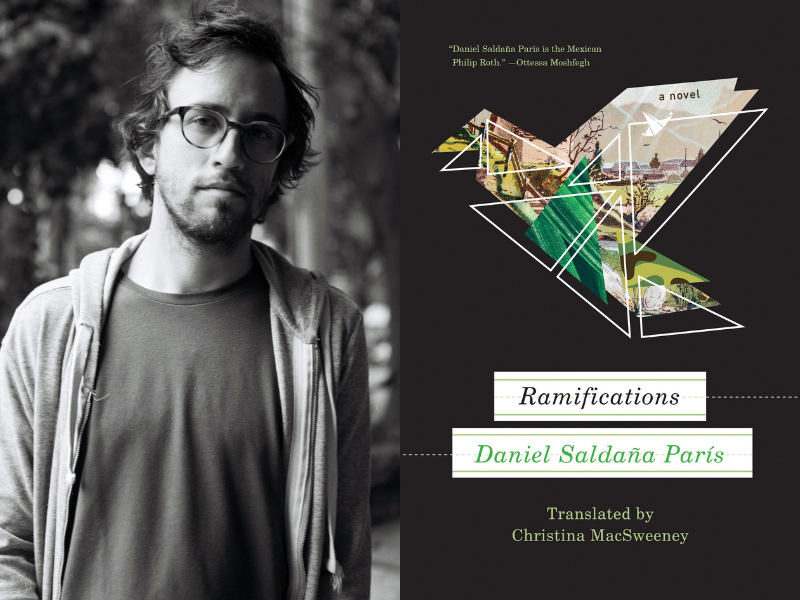 In Ramifications, a neurotic young man, self-confined to his bed, reflects on the turning point of his childhood: his mother's disappearance.

Folding and refolding origami frogs, extracting the symmetrical veins from leaves, retreating to an imaginary world in his closet: after Teresa walked out the door one July afternoon in 1994, her son filled the void she left with a series of unusual rituals. Twenty-three years later, he lies in bed, reconstructing the events surrounding his mother’s disappearance. Did she actually join the Zapatistas in the jungles of Chiapas, as he was led to believe? He dissects his memories of that fateful summer until a startling discovery shatters his conception of his family. Daniel Saldaña París returns with an emotionally rich anti-coming-of-age novel that wrestles with the inherited privileges and atrocities of masculinity. Translated by Christina MacSweeney.

Daniel Saldaña París is an essayist, poet, and novelist born in Mexico City. His first novel, Among Strange Victims, published to critical acclaim in 2016, was a finalist for the Best Translated Book Award. He has been a fellow at Union des Écrivaines et des Écrivains Québécois, the Omi International Arts Center, The Banff Centre, and The MacDowell Colony. His work has appeared in BOMB!, Guernica, LitHub.com, Electric Literature, The Guardian, El País, and on KCRW’s Unfictional, among others. In 2017 he was named by the Hay Festival as one of the best Latin-American writers under the age of 40.

Moderator Alejandro Zambra is the author of My Documents, which was a finalist for the Frank O’Connor International Short Story Award, and three previous novels: Ways of Going Home, The Private Lives of Trees, and Bonsai. His books have been translated into more than ten languages and have received several international prizes. His stories have appeared in the New Yorker, Paris Review, Harper’s, Tin House, and McSweeney’s, among others. In 2010, he was named one of Granta’s Best Young Spanish-Language Novelists, and he is a 2015–16 Cullman Center fellow at the New York Public Library. He teaches literature at Diego Portales University, in Santiago, Chile.